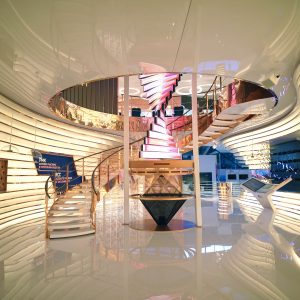 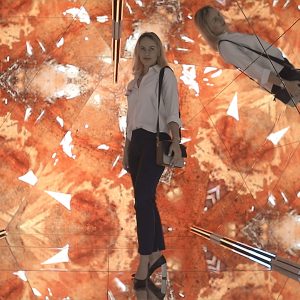 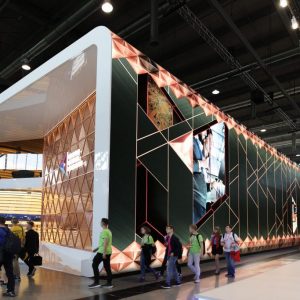 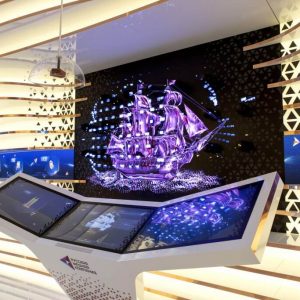 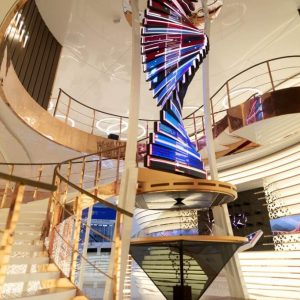 Shininess. Plasticity. Resistance. Conductivity. These are but a few of the qualities of the metal that humanity has been using longest and that actually gave the name to a historical period – the Copper Age. We have never really left that age – copper is linked to some of the inventions that changed our lives completely, such as electricity, trams, computers, wind turbines, neuron interfaces… Copper is civilisation’s DNA.

Simmetrico relied on three factors: the Italian taste of the design, pushing technologies to their limits and treating the contents in edutainment key.

The pavilion’s exterior is almost a showcase of the company’s technological power, its influence in the region and its passion. Three short shows with a perpetually moving DNA filament alternate with images of people, production assets and uses of copper.

The exterior leads into a kaleidoscope that makes visitors in the element of copper become children again.

The inside space is organised around a large kinetic installation that develops upwards. It is the heart of the pavilion. A large helix staircase develops around it, leading to the first floor – it is almost a monument in honour of humanity’s intelligence. All around, the space is design like waves in movement becoming both organic and pulsating.

In the holographic prism at the base of the column is a representation of the Group’s five guiding values, which can be selected with a swipe. The 3D hologram animations interconnect with the visual effects of the large helix overhead. A drop of copper falling from above acts as catalyst that triggers the story-telling.

An interactive and holographic timeline explains the history of copper as a motor of innovation in 15 milestones. The timeline screens are also used to show the Group’s four flagship plants.

The holographic theatre moves at people passages explaining the six challenges the company is rising to. The claim is that “Life sets challenges. Russian Copper Company responds.”

The Social responsibility wall has ten video stories written with typical social networking language made by images and very brief text to read.

The upper floors have meeting halls, the bar and the lounge area with the kitchen. All the above is masterfully executed in every detail, as can be expected from Italian designers and skills all over the world.

Thanks to Simmetrico, the Russian Copper Company was yet again the star at Innoprom.