A home for independence

A home for independence

Agency: WRG – a division of the Creative Engagement Group 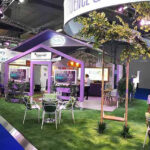 We were tasked with bringing to life a new brand campaign that would dramatise the freedom our client’s product gives to patients with idiopathic pulmonary fibrosis (IPF), a degenerative lung disease. Whilst showcasing this on the commercial part of the booth, we also had to ensure that their disease awareness activity and future pipeline were also presented.

For the commercial zone, we needed to portray how the treatment improved the lives of patients – including the patients of the pulmonologists and respiratory specialists attending the congress. To our client, the greatest gift treatment could give their patients was clear – independence.

With independence being integral to the brand campaign, our client wanted to ensure it would become synonymous with the product in the minds of those attending the congress.

In addition to serving this important campaign launch, we also had to deliver a coherent approach across two other distinct zones.

The home: for most, a place of comfort. Of individual expression. Of freedom. But, for IPF sufferers, as their condition begins to limit where they can go and what they can do, it can become a prison. The commercial objective of the booth was to dramatise the principle aim of their new sales aid – to make their product synonymous with the very notion of independence itself.

We created the ‘Home of Independence’ – an ‘exploded’ house that represented the real homes of those receiving the benefits of the treatment. Vibrant, alive, and full of discoverable stories based upon market research and patient profiles – it would look like nothing else at the congress.

The house would bring to life their new sales aid and its messaging as a collection of patient experiences that would be seen, heard, and felt by the delegates, using stories to showcase the overall brand narrative.

The house would also act as the centrepiece to our client’s presence at the congress, which connected to their other two areas – disease awareness and medical – both thematically and physically.

Because of the booth placement, the most likely delegate approach would be towards where we wanted to place disease awareness – an area highlighting the company’s work in elevating the understanding of IPF within the patient community.

To understand the impact the treatment was having on patients with IPF, it would also be vital to understand this relatively rare disease. For us, there was a clear three-part story joining the different zones up. Disease awareness would be the first part. The second part would be the ‘Home of Independence’ – and the stories of how their treatment could improve lives.

With our client’s reputation re-established through the first two zones, they would then be ready for the third – the future of IPF treatment.

Bright, colourful, fun, tactile – we designed the ‘Home of Independence’ to function like an interactive gallery. A curious mix of high-tech and high-touch, we created a home complete with a roof, walls, kitchen, lounge and garden.

With ‘Hold on to Independence’ as the main tagline to the treatment, we literally asked delegates to ‘hold’ on to purple handle grips around the house. Doing so would deliver a story through a hidden sound shower, where the patient talked about an activity connected to the object. A bike, watering can, hoover, telephone, garden shears – even a tree swing – all had a tale based upon a real patient experience from extensive market research.

For those delegates who may not get stuck into the interactives straight away, we inserted proximity-triggered stories to soften their introduction to the house. The house telephone also rang, beckoning people to pick it up.

Key images from the client’s sales aid were hung in picture frames, messages hung from plant tags in the garden and on paint pots in the shed. Windows were large screens, offering rotating imagery and sales aid content.

Above the booth, we floated ‘clouds’ to help tie the split site together and display headline messaging. We also inlaid strips of grass into the disease area, decked in the wooden floor from the house interior. On the other side of the wall from the house, in the medical area, we had a ‘living wall’ full of plants and greenery that echoed the garden area.

Giant LED patient totems and a mesmerising, intricate acrylic lung sculpture pulsed on the disease awareness side of the booth – whilst a floating solar system of spheres offered a futuristic way to present the key trials, with planets on different orbits representing the different trial phases.

The Commercial Director of the product team declared it “definitely our best booth ever – tremendous creativity and delivery”.

This was backed up by the metrics that recorded nearly a thousand separate interactions and unlocking of stories – more than double the interactions from the previous year.

Customer reactions to the Esbriet campaign was one of agreement – they understood that patients’ independence is the most important thing to them, and that the reason to treat is to maintain this freedom. They found the stories authentic, relevant and representative of patients with IPF.

Booth staff found following up on interactions aided conversations, that delegates found the house genuinely homely – and very different to most pharmaceutical booths – and as a result felt comfortable engaging in conversations about the product.

By ‘showing, then telling’ – and insisting on an experience-first approach – the booth drew the delegates in through their own curiosity. They were then motivated to explore the link between independence, IPF and the product. Crucially, it made them engage with the campaign and the sales aid in a memorable – if not unforgettable – way.