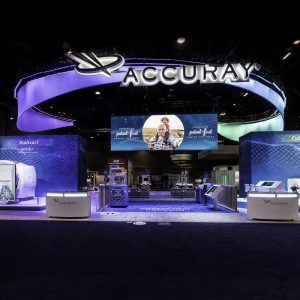 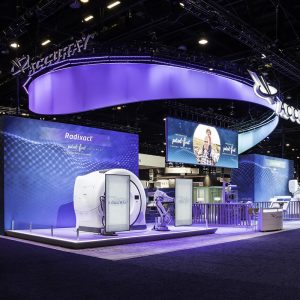 We believe at Accuray that we have invented a game-changing technology for the radiation oncology sector, so we wanted to showcase it in a big way. In the lead up to industry’s biggest scientific meeting — the American Society of Radiation Oncology (ASTRO) exhibition in September 2019 — Accuray set out to shake up this typically conservative field with a dynamic, innovative, creative and educational display.

With its Synchrony® technology ready to launch on Accuray’s Radixact® System, Accuray wanted to position itself as the “patient-first” leader in motion synchronization, backed by more than 17 years of expertise. This innovative product supports the clinically-validated trend of delivering high doses of radiation with extreme precision and accuracy – quickly and effectively killing cancer cells while preserving surrounding healthy tissue. Unlike traditional radiation therapy systems, Synchrony enables real-time tracking, visualization and correction for tumor motion during treatment.

ASTRO attendees would have 200+ displays competing for their attention — making it critical that Accuray’s booth not only stand out but also maintain engagement to foster in-depth conversations with clinicians who work passionately for their patients every day.

Accuray knew it needed to go big at ASTRO 2019. Its team designed an immersive 5,400-square-foot booth (490 square meters) to showcase its Radixact® and CyberKnife® treatment delivery systems – and its Synchrony® software, newly unveiled on the Radixact System.

The central focus of the exhibit? Innovation. To attract and captivate the audience of clinician attendees, consisting of both highly educated and neophytes, to Accuray’s solutions, the Accuray team created a high-energy “robot show.”

• Robotics had never been used before to demonstrate new technology in the medical field — providing Accuray with a prime opportunity to reinforce its reputation as a leading innovator and disruptor.

• The creative use of movement conveys Synchrony as a motion synchronization technology.

The use of robotics also acknowledged Accuracy’s renowned CyberKnife System — the only robotic treatment in the radiation oncology field.
The booth housed a mix of attention-getting technologies — a large LED wall, several live demo stations and several LED screens. It also contained an amphitheater for educational talks. The overall atmosphere in the booth was welcoming, ultra-clean and calming. Combined with the innovative technology used in the robot show, Accuracy’s booth provided the perfect balance of energy and respite.

Staged in front a large LED wall, two robotic arms with 6-axes of freedom were enlisted to tell the Synchrony story and add motion and interest to the nearly 7-minute presentation. The Radixact System was positioned on a turntable in front of the wall to show front and side views, and the robots in the foreground were synchronized based on storytelling and content activation. Each robotic arm held an LED screen that moved continuously in front of Accuray’s Radixact System, telling the story in five chapters:

1. Patient-first opener: A dancing couple, in which the woman gets cancer and falls into deep waters
2. Cup & faucet illustrated metaphor: Displaying the different methods of motion management in an easy, illustrative way and ending with Synchrony as the most advanced for patient comfort and treatment delivery precision
3. The beauty is inside: A virtual reality scan of the internal components of the Radixact System – with a visual description of the enablers of Synchrony
4. The treatment: The woman is treated using the Radixact System and Synchrony
5. Conclusion: The woman returns to her normal life

Accuray’s robot show was presented nonstop throughout ASTRO 2019. It became the main attraction of the entire exhibition for attendees and exhibitors alike.

The robot show — the eye-catching appeal of the exhibit — consistently drew crowds to Accuray’s booth. This enabled Accuray’s sales team to engage with attendees at a level like never before. In fact, 86.7% of Accuray’s team said the show was attractive to customers and 93.7% said that ASTRO 2019 was a motivating event.

Throughout the three-day exhibition, Accuray logged 3,140 visitors to its booth and the robot show received an attendee rating of 4.7 on a 5-point scale — with many attendees describing the show as “innovative” and “fantastic.”

#AccuraySynchrony as a branded hashtag helped contribute to over 4 million hashtag reach throughout the life of our digital marketing campaign for ASTRO. The social posts on the robot show generated more than 48,000 impressions which represented ¼ of all the social engagement during ASTRO. One influencer commented: “What a cool presentation. Love the augmented reality and the water pouring metaphor. Extremely well done.”.
The innovative robot show video alone directed almost ¼ of traffic (1,000 clicks) to our ASTRO landing page efforts or promotional efforts (total landing page clicks = 4,700). Exhibiting the robot show factored into one of the highest promotional pieces of our event generating the highest engaged SEM advertising of any tradeshow we’ve ever run.