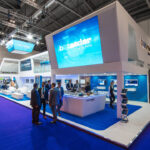 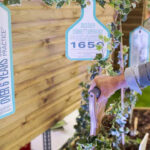 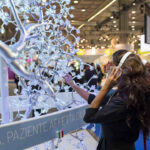 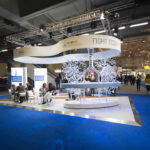 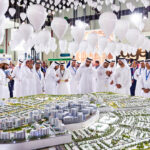 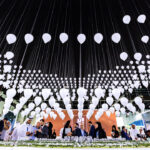 Aldar is one of the largest real estate development, management and investment companies in Abu Dhabi. Our longstanding relationship with Aldar permitted us to push creative boundaries to new levels.

Adar’s stand at Cityscape Abu Dhabi – the leading property development and investment event in the Emirate was to be one of their most ambitious yet, and whilst we didn’t know which development they would be showcasing when we started development, we later learned they would be promoting their ‘Al Ghadeer’ mixed-use development – a region offering a wide range of residential units including villas, townhouses and maisonettes in an incredible environment.

With property developments routinely showcased at Cityscape, we needed to produce something spectacular and adopt a revolutionary approach.

Competition at Cityscape is rife and some of the world’s best creative talents help developers showcase their products in the most captivating way.

We decided to adopt one of the oldest forms of storytelling & bring it right up to date in breathtaking style.

When you go to the cinema, settle down in your seat & watch a film, you see the scenes that have been lovingly crafted by the film’s Director. Look more carefully though & you soon realise that most of the storytelling is done, not with what you are seeing, but what you are hearing. The music. The film’s score. This is where most of the storytelling is done. You may not realise it consciously, but subconsciously the sudden increase in the tempo of a piece of strings music or the cacophony of a barrage of timpani drums is what creates the emotions the Director wants you to feel. Strip away the music & the film you’re watching loses all drama. Moreover, music was used to bring films to life, long before sound recording existed. Silent movies were rarely silent, they relied on music to do the storytelling.

It is this traditional approach to storytelling that we embraced with our solution for Aldar’s stand to capture people’s emotions.

We produced a sectioned scale model of the the Al Ghadeer development & had each section on a bespoke piston that allowed us to automate each section’s height & speed of movement with millimeter precision.

We also crafted 250 individual droplet sculptures & rigged each one to its own custom designed winch producing a sky of droplets over the model – with the ability to control each droplets movement individually. This resulted in a kinetic model & a kinetic sculpture that we could choreography to music. Music that would tell our story. This sculpture was supported too by transparent LED screens surrounding the stand.

With visitor’s attention captured first by the sheer spectacle, the music & movement drew them in, both physically and emotionally to the story unfolding.

Our story was an abstraction of a typical day living in Al Ghadeer. Told though sculptural movement, powerful mood imagery on transparent screens and brought to life with dramatic music.

With the musical score starting gently the 250 droplets started moving low, just over the model as if to represent the morning dew in spring. Green imagery on the screens reinforced this but the music told the story – gradually building from silence like the opening scene of a Scandinavian thriller. This was clearly morning.

Awake and ready for the day, attention moves to the lake area, the droplets now choreographed to produce splashes and ripples in the air over the outdoor spaces of the model, raised aloft on their pistons. Supported by watery imagery, the music had a liquid fluidity to it reinforcing this theme.

The model then maneuvered to reveal the main roadways and the droplets produced a 3D chase sequence above. Supporting imagery showed the scenery moving past us at speed as the music told the story of us travelling down an open road with its higher tempo cadence; creating the repetitive noises we’re familiar with as we are driving.

The story continues with us now in the middle of nature as the model reveals its green areas and the droplets part as if to reveal the sun. The screens show sunlight dappled across tree’s leaves and the music is awash with bird song and enthusiasm.

The model and droplets above are choreographed to a dramatic climatic sequence as the music reached its crescendo supported by ambient imagery of the sun setting across the development.

As the music subsides and the sculpture stills, our audiences were left, for a moment speechless, and then… the applause. It was like nothing seen before and, as we had intended, captivated those attending.

Traditional storytelling. Elegantly delivered in a contemporary style. Hollywood would be proud.

Aldar’s stand being at capacity for the majority of Cityscape’s opening hours would have been satisfaction alone for our client. Achieving this, which we did, was only the beginning though.

Aldar’s product sales on-stand exceeded all of their expectations and they were, needless to say, delighted.

The third benefit of this incredible stand was the emboldening of Aldar’s brand. Whilst they are a well-known brand, they were now perceived as more adventurous and bold in spirit. Attract a new demographic and generation to Aldar’s developments.