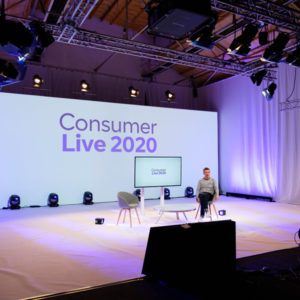 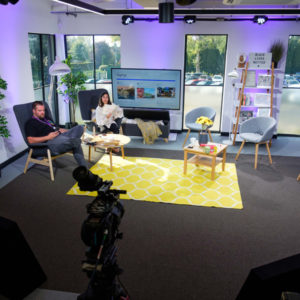 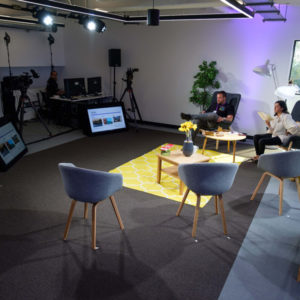 BT Consumer is the main retail division of telecommunications company BT Group, incorporating their leading brands BT, EE and Plusnet. Their vision focuses on providing customers with an unrivalled connection and value through seamless, next-generation broadband, mobile/Wi-Fi packages and services.

Consumer Live is BT Consumer’s major flagship, face-to-face employee annual event. All three Consumer brands are brought together to share stories and hear first-hand, future plans from their senior team. Usually held as a live event, due to the current pandemic and social distancing restrictions, BT asked DRPG to turn its flagship event into an equivalent virtual experience, whilst maintaining the same energetic atmosphere as its annual live events.

In addition to communicating the business direction and the launch of the new ‘Connecting for Good’ plan (highlighting the vital service BT provides in combatting social, economic, community and wellbeing challenges), the event aim was to ensure that all employees throughout the business felt valued, recognised and part of the team. This meant bringing 26,000 colleagues, of which 22,000 work in contact centres and stores, together with the power of digital to truly celebrate their amazing work and frontline support to customers and communities throughout the pandemic, as well as showcasing the outstanding performances across the business.

Collaborating closely with the BT Consumer team, and having delivered their two previous Consumer Live events, DRPG understood the gravity of transitioning from live to virtual. While the business aspect of communicating BT’s vision for the future and company updates were key, it was also paramount that the anticipation and excitement for the event translated into engagement, truly conveying the journey every colleague has been on and telling that story in a way to celebrate the achievements of the brilliant individuals that have kept the nation connected.

DRPG’s Comms, Design, Digital and Events teams worked collaboratively to create a robust, unique, and creative solution. Working closely to deliver a jam-packed, virtual event, we started with a targeted pre-comms campaign six weeks in advance to ramp up excitement and create curiosity in the run up to Consumer Live 2020. The campaign featured: celebrity endorsements a variety of engaging teaser videos, colleagues being invited to take part in the ‘Big Competition’, weeks of summer fun including competitions such as spot prizes, and TikTok-style ‘Tuesday challenges’ (bottle flip, ping pong challenge and lemon eating contest). There was even a chance to win a holiday of a lifetime, worth £10,000. The uptake of the competitions surpassed any other similar activities BT had previously carried out, with hundreds of colleagues taking part in each competition, really setting the tone and excitement levels high ahead of the event.

Having experienced months of climate uncertainty, yet working hard to keep families and communities connected, at the heart of the event was giving back to colleagues, recognising the unwavering effort and immense support they’ve provided as hidden key workers. The leadership team wanted to be visible in the sense that they were still present to lead, support, inspire and empower their teams to greatness.

DRPG delivered the full, interactive and engaging virtual event solution, carrying on the initiative of team inclusion as much as possible by providing colleagues the opportunity to get involved in activities on the day including: the opening video, gameshow VTs, the water park wipe-out, Extended Reality sessions, weekly competitions and the evening show.

Also as part of the pre-comms campaign, to ensure people were being drip-fed information about the event, ‘Little Live’ – a mini, behind the scenes version of Consumer Live – ran in parallel with the main event and into the evening. ‘Little Live’ included access-all-areas content, as well as snippets from celebrities such as football legend Rio Ferdinand and Gareth Southgate, and TV personalities Tess Daly and Rylan Clark-Neal.  This brought the broadcast elements to life, giving viewers a glimpse of what goes on behind the scenes in production and how they are contributing to the event.

The event itself, which aired across multiple streaming platforms to reach all 26,000 colleagues, began with a large opening plenary session, followed by 13 interactive breakout sessions and broadcasts – three from the BT Sport Studios, two live from a call centre, four from the DRPG studios and others using internal Workplace and Teams live – a truly collaborative, multi-location effort harnessing the power of connectivity to bring the event to life.

The event concluded with a celebratory evening award show, aired live on BT Sport TV; celebrating BT Consumer and the team, with over 50 live finalists dialling in so everyone could witness their reactions. The show included game shows, competitions, and £30,000 worth of prizes, wrapping up with a special one-off performance from UK artist Rita Ora in the ‘Big End of the Show Sing-Along’, a fantastic close to the event inviting every guest to participate in the song.

Consumer Live 2020 was undoubtably a huge success. DRPG were able to transform this physical event and deliver a virtual extravaganza, leaving all those who attended feeling motivated and engaged. The event reached more people than ever, with the format allowing over 270% more colleagues to be involved compared to the previous year, and with over 62,000 unique stream views throughout the day.

The reaction on BT’s internal channel, ‘Workplace’, was incredible. They achieved 82% engagement and exceeded their target for weekly active users for the first time. Throughout the day, there were thousands of comments and videos uploaded, averaging 32 comments per post (prior to the event it was 3 comments).

Recognition played a great role in the event, with 68 awards presented and 94% of employees surveyed feeling proud of their colleagues and achievements:

“The event felt very inclusive and made us proud to work for such an amazing organisation.”

“It really helped us to see how far we’d come and where we are heading. I loved the focus on pride in everyone working at BT.”

“Fabulous to see something the majority of us don’t usually get to experience. Well-paced and a good mixture of content.”