Award: Best Use of Technology – SILVER 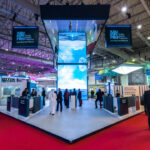 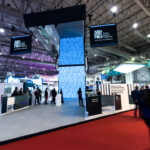 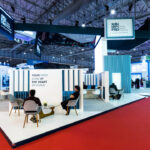 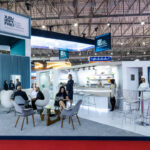 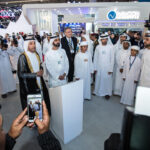 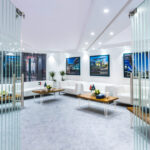 The Dubai Airshow is one of the largest and most successful air shows in the world. Many of the largest names and brands in the industry congregate at the show to demonstrate their products and services on a world stage and agree important, multinational deals supporting global trade.

The Dubai Airport Freezone (DAFZA) is one of the most prestigious freezones in Dubai: a business-friendly region with world class facilities.

In 2017, DAFZA wanted to occupy a 400 square metre space at Dubai Airshow. They wanted to create an impact to build awareness, set themselves apart from the competition and demonstrate their key messages with maximum visibility from anywhere within Dubai Airport’s exhibition hall; to become one of the most talked about stands and attract a high footfall.

To make our challenge harder, DAFZA had few physical assets to demonstrate or bring to life to support their ambition. How do you create a world-class exhibition stand that wanted to make a large statement yet had little to show? We asked ourselves the same question. Repeatedly. Until we came up with the solution.

Our solution focused on a theme that encapsulated an aerodrome’s runway to deliver a key message: ‘Your business is ready for take-off’. The message though was merely the catalyst for a solution that cleverly and elegantly combined content and architecture with technology that had never been seen in the region before to bring the stand to life and grab the attention DAFZA demanded.

The exhibition stand hosted as its main feature an enormous overhead mirror, hovering, in a way that drew peoples’ attention the space, over the stand, revealing a reflection of the audience and the environment surrounding them. An effect that caught everyone’s eye.

Below the mirror, on the stand itself was an LED installation that played out footage and graphics of a plane approaching a runway. The plane taxied down the runway and took off – vanishing out of the top of the LED screen.

Something that many had seen on many screens across the airshow’s exhibition hall. What no one had seen before though, was what happened next.

To audible gasps from the audience the plane reappeared, on its same trajectory over the heads of those watching – magically appearing in the mirror over the stand.

If any of those watching happened to be looking the other way whilst the plane majestically flew overhead, the specially recorded and mapped 360 degree soundscape completed the immersive scenography – as the plane roared over them. An effect as powerful and dramatic as it would have been had the audience been standing at the end of a real runway.

This spectacle, that was enough to force an applause from even the most seasoned exhibition visitor, was supported by additional graphics floating in the sky as the plane soared past:

“Your business is ready for take off,” and,

With the LED screen off, it looked like and behaved like any other mirror. When the LED screen was illuminated, using the carefully created software and with LEDs at the right intensity, the view in the mirror was joined by what was being mapped onto the LED screen behind the mirror.

Weeks of research and development were spent by our designers working with talented engineers and LED specialists to develop the perfect combination of mirror type, LEDs and content creation.

Like many of the most powerful and successful technologies, it looked simple. This simplicity though hid the thousands of man hours and weeks of trials and testing to create the effect.

Our audience, and even our client will never know the effort that went into creating this moment; it’s just what we do. The right technology, in the right place delivering innovative solutions – elegantly and apparently effortlessly.

The numbers attracted to the stand exceeded all expectations with queues forming to find out more.

Our mission was simple: to raise awareness of DAFZA and create an impact. There was no need for any scientific measurements or data analysis to determine if this result was achieved. It was self-evident, and DAFZA were delighted.