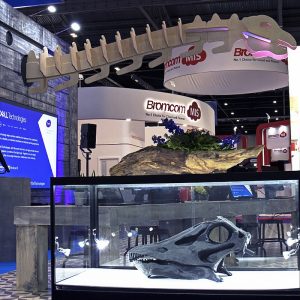 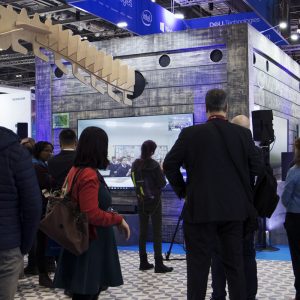 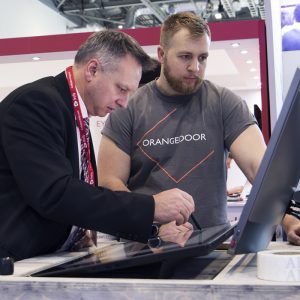 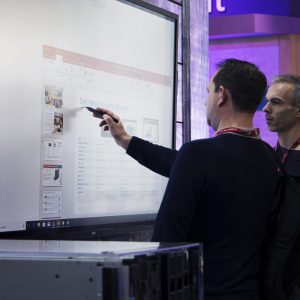 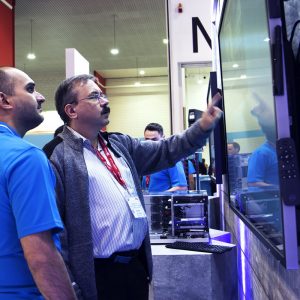 Having delivered Dell Technologies stand at Bett, the largest Edutech show in Europe, for several years, OrangeDoor were tasked with bringing the brand to life in 2019. In previous years, the stand had been product focused, putting laptops, tablets and displays as the centre of attention and encouraging stand visitors to get hands-on with the products. For 2019, Dell wanted a fresh approach. Rather than focusing on the products themselves, they wanted to create something more experiential, and place emphasis on the transformative effect their products can have on education.

Leveraging Dell’s close relationship with the Natural History Museum and their sponsorship of ‘Dippy on Tour’ – the roaming exhibition of their signature diplodocus skeleton, OrangeDoor were tasked with bringing a dinosaur theme to life on the stand.

The stand needed to be an experience that communicated a story of transformation, through the lens of Dell’s partnership with NHM. Attendees discovered how Dell Technologies solutions have helped to support the work of the Museum’s 350 scientists for 20 years, driving data-powered research with high capacity storage and high-performance workstations, supporting compute-intensive processing that allows Museum scientists to engage in truly remarkable research, such as processing scan data of bees’ brains to understand their behaviour and studying shark genetics to help doctors grow human teeth.

The idea that resonated with both the design team and the client was to recreate Dippy himself on the stand. Recreating the entire skeleton was impractical for 2 key reasons; firstly budget-wise this was prohibitive, and secondly as this didn’t allow for any storage space on stand, a key requirement of the brief.

These twin issues were both solved by introducing a ‘Jurassic Park’-style travel crate, from which Dippy’s head and tail protruded out. This allowed us to produce exactly as much dinosaur as we wanted, and also provided ample storage, as well as surfaces for branding and for mounting screens.

The juxtaposition of modern technology with prehistoric design created an environment that was completely unique from anything else at the show. Addressing concerns that the stand could create a perception of Dell being ‘stuck in the stone age’, OrangeDoor ensured there was a balance of modern technology and prehistoric design, and developed comprehensive storytelling messaging around Dell empowering students and the scientists of the future.

Giveaways included a branded puzzle version of the Dippy design, allowing visitors to take a mini Dippy home with them, and extended the experience beyond the show itself.

The objectives for the show were to:
o Generate pipeline
o Inform attendees about Dell’s product line
o Raise awareness of the Dell brand in the education space, and position it as a transformative partner for education bodies

OrangeDoor also:
o Supported Dell’s global PR agency in hosting Dell VP’s for feature interviews with education press technology press and science press, including a tour of the stand.
o A full ‘stand tour’ guide was produced, giving the onsite sales team information about the products and features of the stand.
o Elements such as weathered stone plinths donated to a local school, who now use them in educational displays
o Managed and hosted exclusive off-site meeting room for strategic meetings between sales team and customers. Managed the bookings, and had a hostess who would escort customers from the stand, ensuring all meetings started on time.
o Launch of new Chromebooks and Displays

We saw incredible coverage on social media, as attendees posted photos of the stand. OrangeDoor were awarded the contract for the 2020 stand immediately after the show.

Product videos, shot by OrangeDoor at the event, were subsequently used across Dell’s education platforms and translated into 9 languages. These went on to become some of the most viewed videos on Dell’s platform of 2019, hugely exceeding expectations.

“We have just returned from BETT and would like to report that we had a great time and that everything went well. There are lots of reasons for this not least of which being the exceptional support that Dell provides in facilitating our attendance of the show.”