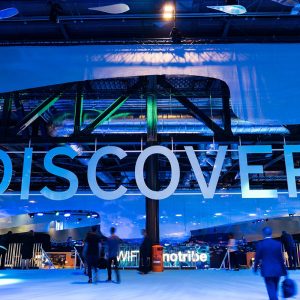 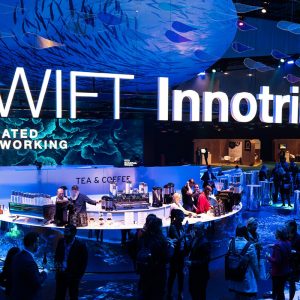 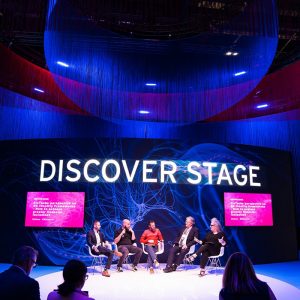 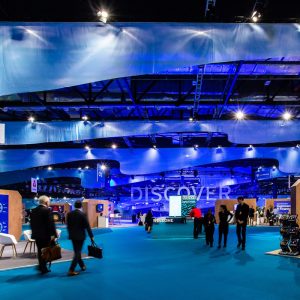 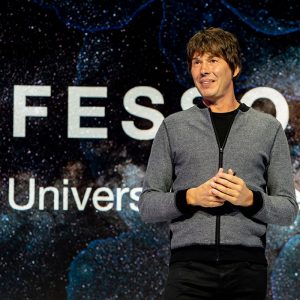 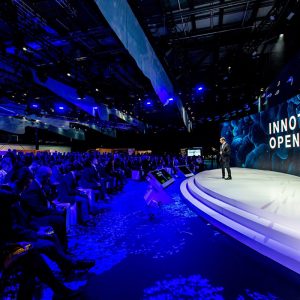 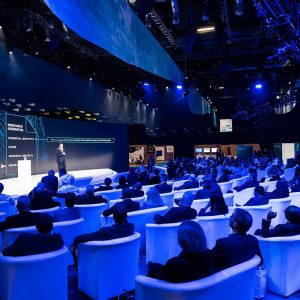 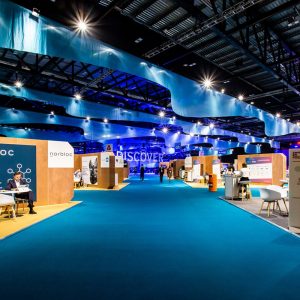 Sibos is the global premier financial services event, hosted by SWIFT. The exhibition is a thriving aspect to the show. A wide range of financial institutions exhibit there, showcasing products, hosting meetings and networking events.
Discover is a relativity new and fast growing aspect of the Sibos exhibition floor. It is not a stand itself, it is zone, and as a feature, it is a whole world of its own.
Rapiergroup and SWIFT have worked in partnership, developing this area, which is differentiated from the usual business of the exhibition floor by a primary focus on the future.
The aim for this environment is that it is a place where people can learn, discuss, imagine and brainstorm for the future of the industry. Our brief was to create a range of areas within the space that could host interactive sessions and presentations. These could range from big ideas and concepts, to smaller and more intimate workshops. Some would focus on future products, solutions and granular detail. As the scope of the brief developed, a live hackathon became another touchpoint, along with hospitality and refreshments and a central information/orientation area.
SWIFT’s requirement of Rapiergroup was to create a world, that facilitated all the different activities, supported by an inspirational, uniting and consistent narrative, which would differentiate this zone from the main exhibition floor, without visible barriers between the two.
We were asked to create an atmosphere that set the scene for imagining the future, whilst also providing a platform where startup business could engage with the big decision makers in the industry.
What they needed from us was to bring it all to life, ensuring that the zone met all of the criteria of their brief and above all, created memorable, meaningful human experiences. The four days of the Sibos show were a valuable opportunity for people to learn, engage and connect with others that and create dialogues that would continue afterwards.

We started by asking ourselves what the uniting purpose and possible narrative of the space really was.
We came to the conclusion that it was to take visitors on a journey of discovery. We brainstormed different ideas of how this could manifest itself and be expressed visually. In the end, we let the venue and surroundings itself guide the right decision.
The zone occupied two halls of ExCeL London, the second being on a lower level than the first. It meant that halfway into the space, visitors would have a view down into a lower level, and could descend into it via a staircase. We also had full control over lighting, without any windows that would let in natural daylight. We felt that we had the opportunity to create something really atmospheric and theatrical.
This lead us to deciding on a deep dive. With so much of our planet’s oceans a complete mystery, this direction had enormous creative potential.
We took the opportunity to set the scene of a world that darkened as you ventured deeper into it, light levels dropping and the atmosphere becoming more mysterious as you descended. This allowed us to create individual features that contrasted with the overall zone atmosphere. Imagine the mysterious, iridescent creatures that live in the depths, imagine the colours, the formations and the fluidity.
We wanted visitors to see this, but most important of all, we wanted them to feel it. A complete contrast to the businesslike atmosphere of the main exhibition.
A place where the atmosphere itself, the look, the flow and the design all worked together to encourage people to think differently.
That is what we set out to create and deliver.

Our first step was to turn off all hall lighting for this zone. There was no physical barrier between the end of the main exhibition and the start of this, which meant that this simple factor created a gradual drop in light levels as you ventured into the space.
We gave the whole zone a colour identity, which was azure blue. The carpet became this colour the moment you entered. We designed undulating suspended voiles that spanned the entire width of the hall. Venue air conditioning naturally animated the waves, aided further by atmospheric lighting.
With overall light levels reduced, every individual touchpoint was then able to be lit or illuminated to create strikingly theatrical features. These were carefully designed to be abstract, but in a way that visitors would know what they were. For example, a minimalistic and intimate stage area was very definitely a jellyfish! It just wasn’t a literal representation.
A Fintech marketplace was created for startup businesses to exhibit in. Rather than simple shell scheme pods, we designed and created slick modules built from raw untreated timber. These could be branded and augmented to suit individual exhibitor needs, but had a relaxed and natural feel to them, sitting perfectly with the overall organic style of the space.
The showpiece was the main stage, known as SWIFT Innotribe. This was the main destination within the zone, hosting incredibly high-profile presentations and sessions. We placed it on the lower level, so it could be viewed from above. Avoiding traditional exhibition design solutions, the space was designed with fluidity and mirrored materials that blurred boundaries and created the illusion of a space that had no defined footprint.
A large curved LED backdrop ensured that content constantly breathed life and dynamism into the structure itself. An abstract shoal of fish circled above the space, diving upwards to the higher level. These details ensured a complete fluidity within the whole zone.

At the time of writing this submission, we are still awaiting the official customer survey results from SWIFT, and detailed post-event data/analytics. We will happily provide this as supplementary information, when it is available.
The feedback on site and post event so far has been overwhelmingly positive. Discover was a thriving destination for all four days of the show, with the stages, marketplace and all areas being consistently crowded and buzzing with activity. It just all seemed to work naturally.
The fact that nothing had to be re-thought, addressed, or changed throughout the live show days demonstrated that everything just worked. All visitors appeared to engage incredibly naturally with all touchpoints, and even the crowds did not appear to be an issue. The whole environment was designed so well, that peak traffic could easily be accommodated.
The placement of SWIFT Innotribe ensured that the most popular sessions could also be viewed from the upper level, which became a natural viewing platform, offering a different perspective that was equally good to being up close.
Feedback on the theme and design of the whole space has been overwhelmingly positive. Everyone understood the difference of the zone from the main exhibition hall.
The single piece that was most talked about was the jellyfish. It was the single aspect that generated the most comments. We have received a lot of positive feedback about how such a simple and sustainable approach to design created a very impressive presence. We are particularly proud of that, and think this is a key learning for the future of exhibition design.
We are eagerly awaiting the final survey results and data, but we are quietly confident it will be positive. The zone was always busy. It was a destination and people stayed in it long after the purpose of their visit had ended. People wouldn’t do that if it wasn’t a good environment to be in, and doing it’s job well.