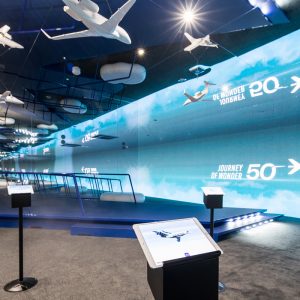 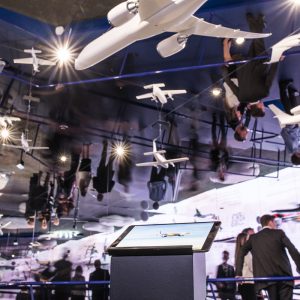 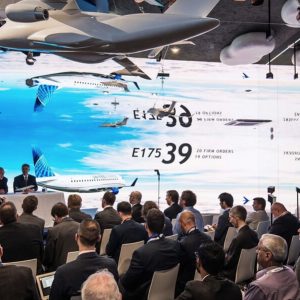 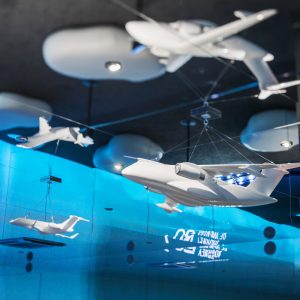 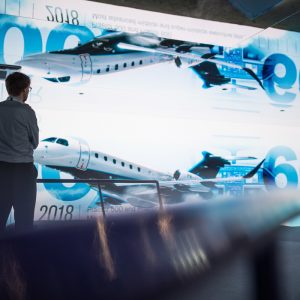 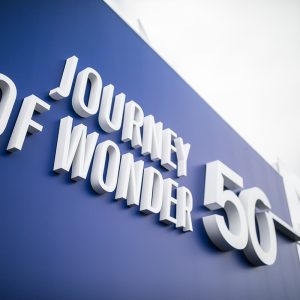 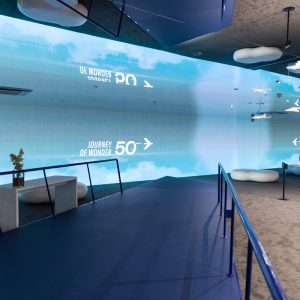 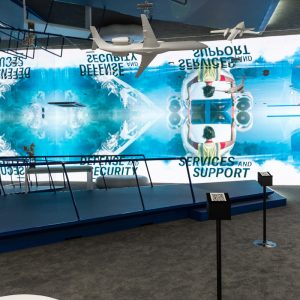 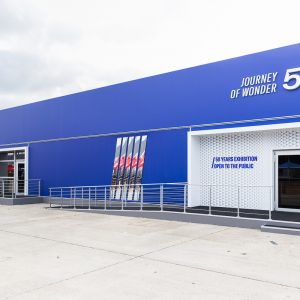 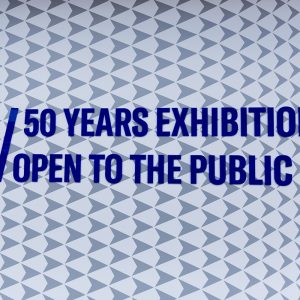 The Paris Air Show 2019 ran from 17 to 23 June. It is the largest and oldest air show and aerospace industry exhibition in the world. There were thousands of exhibitors and hundreds of thousands of trade and public visitors.

Recognised as the most innovative company in Brazil, Embraer is the country’s main added value product exporter. It is one of the world’s leading commercial jet producers. RTH have been working with Embraer for several years as their exhibition design and project management agency. And in 2019 the brief was for something truly special.

To celebrate its 50-year anniversary, Embraer launched a campaign named “Journey of Wonder”. The exhibition planned for the Paris Air Show had to convey this campaign’s spirit.

The celebration was meant to represent the best of Embraer’s traits of creativity and boldness. Through the medium of immersive storytelling it was intended to be an extraordinary example of how the company and its employees live to amaze customers and stakeholders around the world.

In a competitive and creative environment like the Paris Air Show, where all the big players in the industry had a presence, Embraer’s objective was to create a true highlight of the show. RTH were responsible for creating a chalet, static area and pavilion. It was the pavilion which would tell the story of their Journey of Wonder, and what this submission for Best Storytelling is based upon.

The scenography concept of the Journey of Wonder, to be executed by RTH, was created by Carmela Rocha and Marko Brajovic. From Brazil, they’re known for their work in exhibitions internationally. The concept for RTH to develop was for an immersive experience where visitors could share Embraer’s history in a fun, interactive way.
In a completely enclosed environment with no natural light, a marrying of digital and physical special effects was used to tell the story and achieve the sense of immersion.
The centrepiece was a room-length, 14-metre LED wall. It showed a beautiful skyscape and narrative information about Embraer’s 50-year Journey of Wonder. The LED wall was complemented by a mirrored ceiling and walls, creating an infinity effect.
Cloud-themed seating would reflect off the mirrored ceiling making the visitor feel as if they were walking among the clouds. Suspended model aircraft and 360-degree sound filling their ears completed the effect.
Entering via a dramatic reception area, visitors begin on a walkway shaped like a plane’s wing. Like the other floor-based features it reflected off the ceiling, only this time to the added effect of forming the Embraer logo. A concept which worked perfectly to the client’s delight. The storytelling is then delivered through a multi-sensory experience which harnessed technology in innovative ways.
Moving off the walkway, they could step through the clouds to experience augmented reality touchpoints via tablets. These expanded on Embraer’s story by allowing visitors to interact with projections of aircraft.
Every story needs an audience and different audiences require different environments to get the full effect. Embraer wanted to use this remarkable exhibition space to share their story in media events too. So we had to design the space so it would work equally for visitors walking-through, and for sit-down events. Detailed thought went into optimising the LED screen for this purpose and having adaptable floor space.

The sheer boldness of this vision made for a challenging brief for RTH to execute. Much of what was proposed wouldn’t have been out of place in a permanent, museum-quality exhibit, with a required budget to match. So it was our job to make the creative idea, which everyone bought into, work in a temporary structure.

Weeks of cross-time-zone conference calling ensued as the specifications were refined to achieve the vision with as little compromise as possible.

For example, a temporary structure could not support heavy glass mirrored ceilings. So our designers scoured material options and came up with a light-weight stretch fabric material that still achieved the mirrored effect.

Another consideration was additional ambient lighting which had to satisfy the creative concept as well as health and safety regulations in a building which had no natural light.

Once we had evolved the designs into an achievable project with our creative material solutions and innovative AV including the large format LED screen and augmented reality, we began on the installation.

Part of our ethos is to start and finish the build early to give the client time to inspect their asset pre-show. This was especially important here as the complexity of the exhibit meant there was no way to replicate aspects like the lighting and other effects in meaningful test conditions.

After a successful build phase, Embraer had a dedicated 300sqm area to promote its historical storytelling exhibition in the French capital, alongside their chalet and static area. The Journey of Wonder pavilion showcased the most significant milestones of the company.

Nearly 8,000 people visited the exhibition over the seven days it was open. A nice touch was that the pavilion was open to the public every day. For Embraer this was valuable for generating content through hashtag posting and brand awareness – both with the primary business-to-business audience and the final consumer audience.

Approximately 50% of the visitors used the augmented reality solution. Of course, the kids rocked it!

Additionally, Embraer were able to use the pavilion for large press announcements with amazing images resulting from it, and a great environment in which to host the media – an important stakeholder.

Most external and internal guests complimented Embraer on the visibility of their presence at the Paris Air Show, the amazing pavilion and the way they celebrated 50 years. And as a happy client, Luciana Garzon, Embraer’s head of corporate events, said:

“We have been working with RTH on a long-term basis and were very confident they would deliver our Paris 2019 projects to specification. This year, we celebrated our 50th anniversary and it was a huge challenge to design our pavilion to the quality standards we required and within budget. RTH’s participation was key to enable Embraer to display its history at the show with an elegant and unique presence.”

Commercially the Journey of Wonder storytelling pavilion contributed to a great success for Embraer. They announced firm orders and purchase rights to dozens of new planes from Spanish, Japanese, American and Dutch airlines. And they revealed that they expected global demand for more than 10,000 new aircraft with up to 150 seats over the next two years. Here’s to Embraer’s next 50 years of storytelling!