Event Name: For events around the country 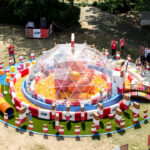 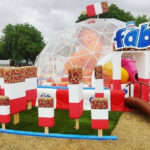 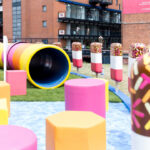 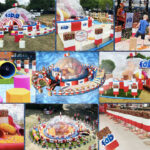 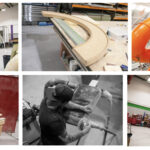 We were asked to build a circular stand which was 15m in diameter and it needed to have a transparent dome, 3 spiral slides coming out of a giant Fab lolly inside the dome, a ball pit and a play area around the edge. The dome needed to have a Fab lolly on the roof and the fencing of the stand was to be made up of lots of 3D Fab lollies. The play area around the edge was to consist of 3D Fab lolly trees, a sprinkle coloured tunnel to crawl through, stepping stones over the water effect flooring, a wobble bridge to get you to land and then the blast of sprinkle coloured confetti shooting up from the floor between the giant sprinkle coloured feet. There needed to be a bridge into the dome and an outer moat around the dome which is another ball pit. We needed to build an archway as a welcome area and a giant lolly shaped doorway going into the dome with a big Fab sign. This needed to tour around the country so we had to make it easy to rig and de-rig.

The client supplied a scamp which we worked from. We then made an accurate visual to scale which changed the size of things so it became much more realistic and we then worked from that. The first thing we needed to focus on was the dome as it was such a prominent feature. We found one that was easy to rig and had a clear cover so you could see the inside of the dome. The large lolly structure inside the dome was made and then we custom made fibreglass spiral slides in specific pantone colours. The walling around the ball pit and ball pit outer moat had to be very strong so this was built with an interior strap system which held them all together, making sure they didn’t break. The balls to fill the ball pit were matched to the colour sprinkles on the Fab lolly.
For the outer perimeter fencing, we vacuumed packed the lollies to get the 3D effect. We did the same effect for the giant lollies on the artificial grass. The wobble bridge was bespoke made to match the curve of the circle. We made sure this was made to health and safety approved standards. The raised floor in which the confetti shot out from was made using leaf blowers, remote controls and biodegradable tissue paper confetti which matched the colour of the sprinkles on the lolly. The confetti was stored in boxes underneath the raised flooring with leaf blowers attached to the sides and tubes coming out towards the hole in the floor. This was activated by the event manager, so they could control when this went off for health and safety reasons. We made sure the confetti blasts were effective yet gentle, so didn’t cause any accidents!
After the first activation, the hot summer sun was creating a greenhouse effect in the dome. We solved this problem by sourcing and installing two large air con units, which kept the dome a cool 20 degrees in the 32 degree heat.

The Fab stand was a huge success. It massively increased the awareness of the brand of the lolly. It was in lots of national newspapers and all over social media. Stacy Solomon was the celebrity influencer for the event and she posted a few photos on her Instagram page and published some Instagram stories, which has 1.1 million followers.