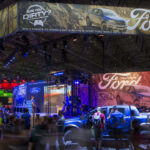 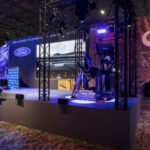 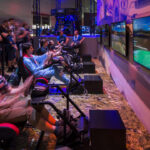 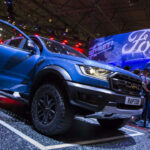 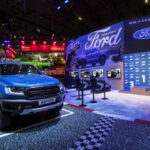 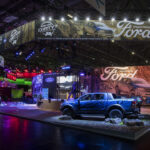 At Gamescom 2018, the Largest Gaming Show in the World with attendance around 400k Press and Fans we created a launch of the type the Motor Industry has never seen before. Creating a Partnership with Forza Motor Sport, the biggest racing game brand in entertainment, we created a simultaneous launch both in market and in-game, being the first in the World to do so. Ford is the most featured car manufacturer in gaming, and one of the biggest innovators in technology, therefore we wanted to make innovation and technology and key narrative of the launch and experience, but additionally gaming is where car brands become relevant and engaging to the next generation of consumer. Beyond the launch unveil moment, we created an amazing spectacle and experience based with these key components. The Booth featured as a center piece, a bespoke unique 4D simulator pod experience, and a fastest lap competition on the booth. This blended and blurred the lines of the virtual gaming world and reality. The Public would be able to choose ‘Are you Dirty? or Are You Street?’ and race head to head on either a ‘street’ or ‘dirt’ track, for their chance to posting then the fastest Lap of the World’s First of its kind experience of a Fully Interactive Live 4D Simulator Pod and compete for the major prize.

The Press were first wowed by an unveil launch and then a chance to experience the World Leading 4D simulator brining the drive experience to life. The simulator not only would throw them around corners and up in the air as they traversed the extreme off-road track, also they would feel the wind blow in their face as they made jumps, splashed in the face when hitting wet terrain, and dodging real leaves as they sped through a leafy scene. It was a real live interactive drive experience meshing the virtual and reality world together, not only creating an amazing and unique drive experience, but also a highly viewable spectacle. The Public would later race head to head, to be finalists to post a fastest lap, where each day winner would then be taken to the Ford WRC HQ, then learn and experience driving with a Professional Rally Driver.

Both the Lifestyle and Motor Press coverage smashed all targets and created a unique stir in a competitive period. Consumers were blown away by the experiences with queues to compete extending beyond 4 hours at peak times and driving significant positive social chatter and support. Ford clearly establishing itself as an innovator and relevant to all generations through the innovative use of experience and technology.