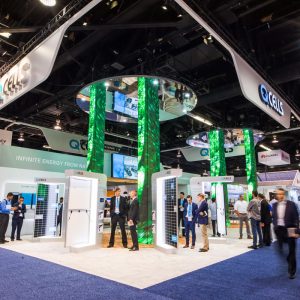 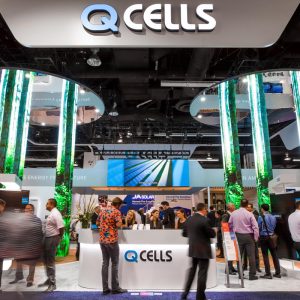 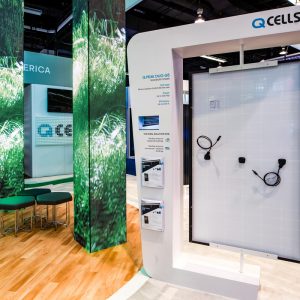 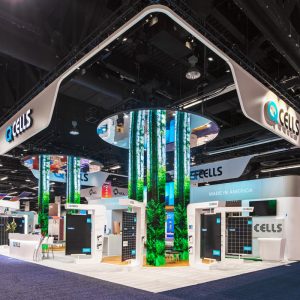 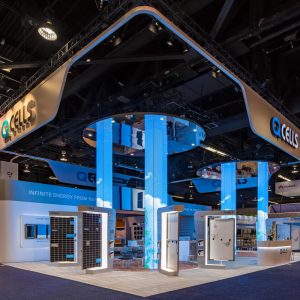 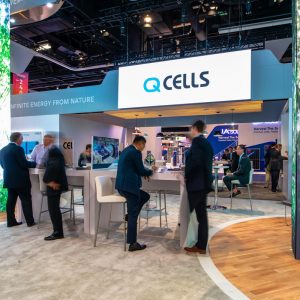 Building off the previous year’s success at the show, Q CELLS wanted to elevate their presence to help secure the growing solar manufacturer as a leading player in the solar industry. Light and motion were expected to be a centerpiece of the booth display to help create an engaging and welcoming trade show booth.

While many attendees were familiar with Q CELLS, SPI 2018 was an opportunity to exhibit the superiority of the Q CELLS global brand and their products. To do so, Q CELLS wanted to blow the rest of the vendors out of the water through innovative and unexpected design solutions that would showcase their dominance in the American market as a technology leader.

Being that this was the North America-centric show, Q CELLS leveraged this opportunity to not only showcase their existing product portfolio, but also introduce their “Made in America” products which would eventually be produced from their new manufacturing facility in Georgia. This meant that a large focus was put on creating custom and attractive product displays for this new line of products, and highlighting that area somehow through light and motion.

A primary inspiration was the Q CELLS tagline – Gain Infinite Energy from Nature. This led the design team to incorporate some form of natural feature as a main focal point of the booth. However, with the goal to showcase Q CELLS as a technology leader, it didn’t make sense to just bring in some plants or fluffy clouds. By using digital content, we were able to make several of the metaphors a reality. The LED pillars allowed us to create directional movement with any imagery we program onto the pillars, while giving us control over a variety of different visuals to represent the metaphors we chose to communicate. Energy could flow down from the sky to metaphorically power the panels and environment below while digital greenery can cascade upward creating a warm, bright and healthy environment.

Technology was integrated as the centerpiece of the design and used to help communicate the Q CELLS tagline – Gain Infinite Energy from Nature. Six (6) 20’ tall LED pillars arranged in an infinity loop created a communal space where guests, tech, and Q CELLS products could all happily coexist.

On the floor beneath each three-pillar display, was a circle of woodgrain flooring to echo the circular mirrors above. Surrounding the pillar displays on the ground were custom product displays for Q CELLS solar panels which were arranged in a radiating display around each of the two three-pillar displays. These displays were used to showcase the USA-based fabrication capabilities through physical product displays while supporting messaging was included to communicate the story behind their best-in-class performance and German engineering.

The entire space was 50’ x 60’ with a 20’ height restriction. Primary digital architecture used the full 20’ height while secondary messaging slotted in between 8′ and 12’. Light and motion were used to attract attendees from afar and served as their first touchpoint with the Q CELLS brand and product. Six (6) individual 20’ LED pillars were arranged in groups of three (3) at the front half of the booth space with a mirrored ceiling platform that created the illusion of a 40’ digital ‘forest’ when viewed from below. Vertical-oriented digital content flowed from the floor to ceiling connecting products to the overhead structure, suggesting the product’s literal dependence on the solar rays above the clouds. The front half of the footprint facing the main aisle was dedicated to the LED pillars and product displays which also contained some casual seating. The rear half of the booth was dedicated to a physical structure that contained a hospitality bar and private meeting rooms.

The technology integration was a step forward for the Q CELLS design language that will carry forward to 2019. The 20′ height restriction for the expo hall did limit the creative vision for an infinite loop of natural imagery, however, the mirrored ceiling solved this by creating the illusion of extended pillars when viewed from below. Rich greenery and wood tones support the idea of energy flowing down the pillars to create a cleaner, greener environment. The pillars had looping video playing throughout the entire show all the way up the 20′ pillar which also created a beacon for attendees to aim for from across the show floor.

Vertical solar panels were mounted on custom product displays which were arranged in a circular fashion around the two groups of LED pillars. The prominence of these displays and symmetrical nature of the booth design established a cohesive, product-centric experience for attendees.

As with most trade shows, a big goal for our client’s presence on the show floor is increasing brand awareness with the key industry experts and partners while also booking meetings with said attendees. Additionally, Q CELLS put a large focus on promoting their USA-based fabrication capabilities, their German engineering and best-in-class performance of their products. Their tagline – Gain Infinite Energy from Nature – was a key message to be communicated somehow in their booth. With one of the largest footprints on the show floor, it was imperative that their booth make a big enough impact to support the size of their booth.

The Q CELLS display was the grandest space at SPI 2018 which gave their customers a view at the company’s scale and health. By leveraging unique and custom technology, the booth design itself helped deliver the message that Q CELLS is a technology-influenced brand before attendees even engage with booth staff. The 20′ LED pillars paired with the overhead branding was integral to improving brand awareness and drew attendees from across the show floor.

The booth earned Best-In-Show award in the Island/Peninsula category by SPI.