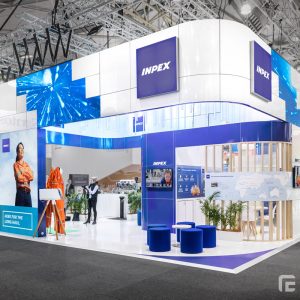 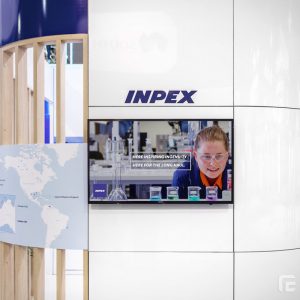 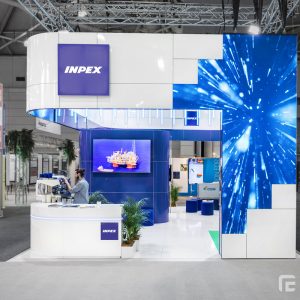 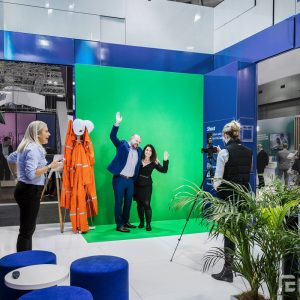 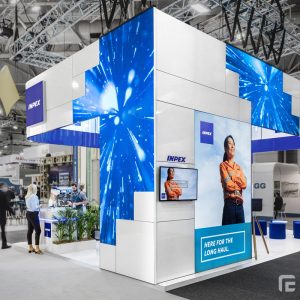 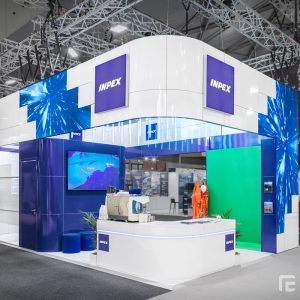 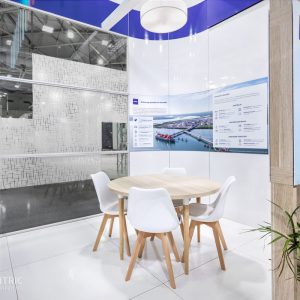 Expo Centric were invited to tender for the design and build of the INPEX stand. The design brief was comprehensive and fulfilling all the design requirements was imperative to achieving INPEX’s exhibition success.

Expo Centric competed with a number of other exhibition stand builders to win the tender. The INPEX stand design included all aspects required by INPEX to achieve their main exhibition objectives of achieving a high level of brand recognition through increased exposure, showcasing Ichthys LNG and INPEX as an experienced international oil and gas operator with a long- term commitment to Australia.

The custom-built stand submitted for tender was designed to helped to highlight INPEX’s corporate values while offering them a high level of creativity, interactive components, and having maximum visual impact to help them draw visitors to the stand.

The stand was designed to be built using Aluvision OMNI-55+ Framing. This modular framing system would allow Expo Centric to build a stand with curved walls, non-standard height and easy incorporation of technology such as Aluvision LED skin video walls. The framing system would also reduce the environmental impact of the stand build and reduce wastage.

In order to achieve the brand recognition INPEX desired the stand was designed to have maximum presence and be a dominating exhibit at the show.

To achieve this the stand was to incorporate a large bulkhead, strong use of technology including LED skins and strategic use of lighting.

The stand was also designed to include interactive activities that would help draw in a crowd and create hype both on the stand and through social media. To further draw a crowd the stand would also include an on-stand barista.

BULK HEAD
The INPEX design incorporated a 4.5m high perimeter structure with the bulkhead attached to the stand. This bulkhead allowed for the INPEX brand to break through the exhibition clutter. Other stands at the exhibition had ceiling height rigged banners and standard height floor structures, showing their brand at a ‘high’ level and a ‘low’ level; leaving the ‘middle’ area empty.
The INPEX bulkhead sat in this ‘middle’ empty space between the rigging and floor structures, making it viewable to all attendees from anywhere in exhibition space.

GREEN SCREEN
The INPEX stand included an Green Screen to encourage attendees to interact with the brand. The green screen allowed INPEX guests to put on safety gear and be ‘transported’ onto an offshore oil rig.

TECHNOLOGY
The INPEX exhibition stand combined high technology use with LED skins on all 4 sides of the stand. The LED skins were seamlessly integrated into the stand design being flush mounted for a sleek finish.
The LED skins were an integral part of the stand design to provide dynamic movement and high-quality imagery throughout the stand.
TV’s were also incorporated into the INPEX stand. TV’s were strategically positioned on all sides of the stand for secondary level of messaging. The INPEX stand also incorporated a large 85” TV inside the stand for more dynamic vision and key messaging.

LIGHTING
The lighting on the INPEX stand was multifaceted. Pixel Tubes were hung from the ceiling of the stand to create ambience. The inclusion of light boxes showing INPEX logos clearly highlighted the company branding and presence at the exhibition.

COFFEE
In early design stages combining barista made coffee into the INPEX exhibition stand design was imperative. The stand needed to be inviting and welcoming to exhibition attendees.
Sourcing to right coffee was no easy feat, but by day two of APPEA it was obviously we had succeeded in winning the coffee ‘war’, attendees were queuing up as soon as the doors opened.

The success of the INPEX stand design was in creating an open, inviting space, with multiple areas for the attendee journey.

Initially, the stand had a strong presence, which was created by the dominating perimeter structure, bulkhead and LED skins. The height of the attached perimeter bulkhead created a prominent feature that cut through the exhibition signage, creating a strong brand presence.

Using high quality imagery and the latest in technology, Aluvision LED skins, we were able to help INPEX demonstrated their offering and spread brand awareness.

Next, attendees were drawn towards the stand with the use of eye level TV’s.

The TV’s used digital imagery and videos to visually illustrated why people should visit the stand and helped to increase the brand awareness.

For more serious attendees, the stand also incorporated a formal private meeting space at the rear of the stand.

Each element discussed in the activation played a part of the success of the INPEX stand.