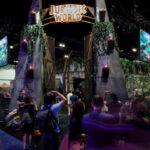 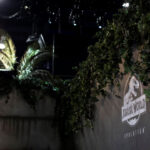 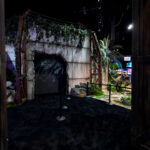 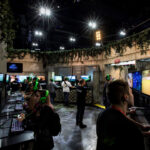 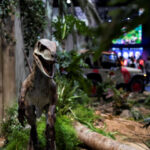 The client, Frontier who are the Publisher of the amazing new game Jurassic World coinciding with the Hollywood Blockbuster, wanted to launch the new game to the World’s Press and Industry Trade by ensuring that the game content came to life for the audience.

Envy created a Booth Experience that immersed EVERY attendee in to the chilling and sense heightening Jurassic World at every level they would experience the Booth, throughout the entire journey whilst ensuring that were fully engaged. This involved an immense level of design detailing to ensure that every detail was recreated correctly, as well as full theatrical experiential immersion was also designed with absolute consistency to the game, including sound effects directly lifted from the game, and scenes within the game recreated as a part of the journey.

The entire Booth was surround by a Dinosaur attached fencing and gates, with overgrown jungle plantation, dirt ground with scaled footprints of Velociraptor, their curdling sound as their eyes appeared from the shadows. The Towering Jurassic World Gates some 20-foot-tall imposed the Grand Entrance in to the Booth recreated to scale from the set within the game. Traversing through the jungle, visitors would enter in to the briefing room. This was the briefing room from the Game, which most people found very familiar from the movie series, with actors in costume and character as the Hosts for the visitors to the Jurassic World Park, welcoming and orientating them. This would immediately fully immerse our guests in to the entire experience and also brief them for the experience to follow.

Once the briefing finished they were released in to the walled Theme Park area where they found themselves inside the park with every detail recreated, from the broken sparking electric fencing, the metal doors and walling with rusting bolts and overrun in vines and plants. The hands-on game play would take place in this space, where they would enter the virtual world within the game also, with sound effects around them of each of the chapters of the game.
Private Meeting Rooms were also recreated rooms from the set within the game, and photo ops were set all around to capture and share such an amazing experience.

Jurassic World the Game, and Frontier was hailed an unabated success by everyone who experienced it. The world’s media and trade who attended praised the level of detail that was achieved by the Booth at E3, and most commented it was by far the Best Booth of the Show. This spring boarded the Publisher and Game to a new-found energy of support that they have continued to ride since.