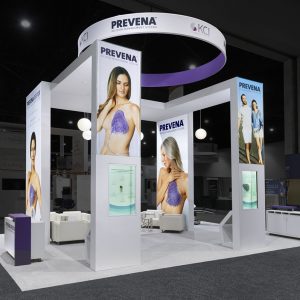 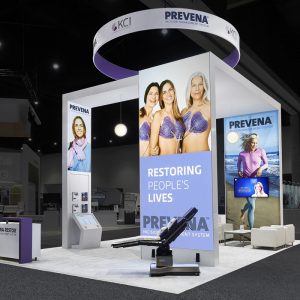 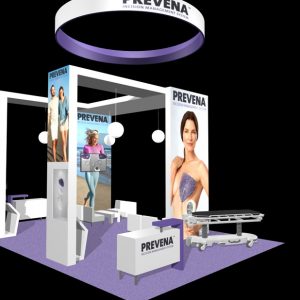 KCI was looking for a cutting edge design that combined clean, clinical aesthetics with creative use of technology.
They were launching a new device, and this exhibit needed to portray them as a forward thinking, clinical leader.

The use of the modular frame system by Aluvision was used, as well as custom elements to provide KCI with a unique and impactful presence on the show floor. The LED screen tower was comprised of Hi-LED tiles which provided strong branding and messaging at the entrance of the exhibit. The incorporation of custom components set the exhibit apart and allowed us to provide KCI with some creative technology elements. One such, element was the use of OLED glass screens, which gave KCI the opportunity to display the device with enhanced messaging. This provided a strong visual element which engaged and educated the attendees.

The exhibit was debuted at the ASPS show in San Diego. The use of the modular frame system allowed for a quicker installation. A CEI representative was on site to aid with the install and programming of the large LED screen.

Client confidence in the exhibit performance was high. Overall attendance for the ASPS show was up, thus increasing exposure to the new device launch. The location of the exhibit was prominent and the overall design elements helped focus and attract attendees to the exhibit. The outcome of the show was so successful that the exhibit was used in an inline configuration at another show to launch a different device.