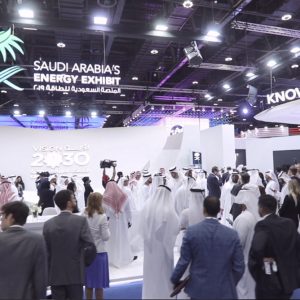 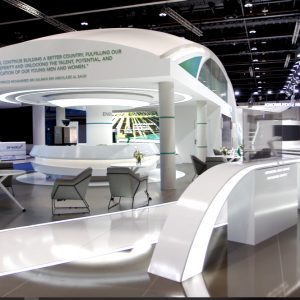 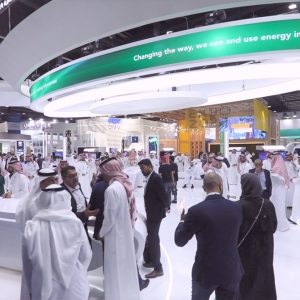 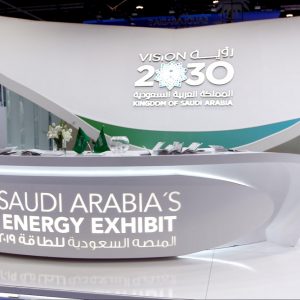 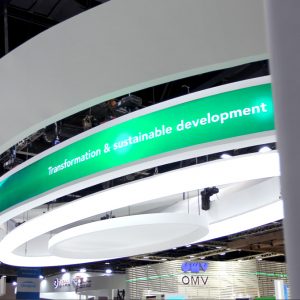 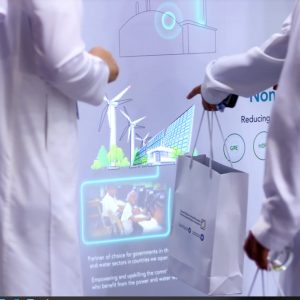 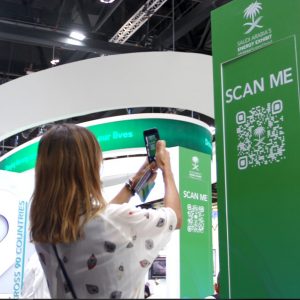 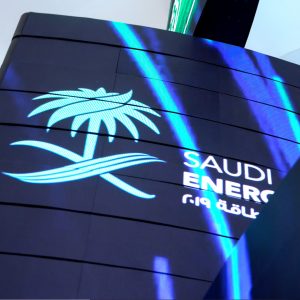 For the 24th World Energy Congress, the global flagship energy event that took place at the Abu Dhabi National Exhibition Centre in September, GES were entrusted with repositioning the Kingdom of Saudi Arabia (KSA), as a committed and passionate advocate of and leader in green energy. They are currently the second largest producer and exporter of oil and gas in the world so this would be no mean feat. The KSA wanted to highlight their position at the forefront of sustainability and energy innovation, and as the next destination for future young talent to live and work. The brief was to create a commanding, striking presence at the heart of the show that told the story of their brand evolution to industry influencers, customers and heads of state on a global stage. The brief included highlighting the achievements of Zero Saudi oil and gas companies and required a complex double decker pavilion design with cutting edge digital content.

Working in tandem with His Royal Highness Prince Abdulaziz Bin Salman Al Saud and Saudi Arabia’s new Minister of Energy, the GES team based in the United Arab Emirates (UAE) managed the entire project lifecycle, including creative strategy, build, digital content and audio-visual. The GES creative team developed the message ‘working towards a clean green environment’ along with an accompanying theme, which was incorporated throughout the campaign. Our design and build team created an extensive open-plan, double deck, pavilion stand with distinct areas that enabled the KSA to engage with different audiences simultaneously. At 1,400 sqm it was the largest stand at the WEC and included a welcoming reception area, several presentation zones, a knowledge hub, a VIP room and a number of media suites, which allowed visitors to engage with the universal vision and interact with 20 key domestic companies and organisations that were exhibiting on the stand. Harnessing digital content, interactive touch points and activations, it provided an immersive and experiential visitor journey that helped to explain the overarching story, showcase the 20 exhibiting companies and change the perception of the KSA.

On the opening day of the Congress, the futuristic design of the KSA stand made quite an impression. The clean white lines of its architecture and its fluid layout created plenty of open space for the vast array of interactive technologies that took the visitor on a journey through KSA’s vision of a greener future for the industry. At every turn there was a multitude of technologies ready to engage and entertain the interests and imaginations of visitors including touchscreens, virtual reality booths, projection walls, interactive tables and holograms, all dovetailed with quieter, more private lounges and meeting areas.

During the Congress, His Royal Highness Prince Abdulaziz Bin Salman Al Saud and Saudi Arabia’s new Minister of Energy outlined the KSA’s relationship with OPEC and its plans to develop renewable and nuclear energy solutions as part of a diversified energy mix to meet demand in the future. The campaign received widespread positive coverage, focussing on the sustainable initiatives undertaken by the KSA as it moved towards a sustainable future. During the Congress, there were 72 pieces of news and feature articles directly referencing Saudi Arabia’s participation at the 24th World Energy Congress and its commitment to a greener, more sustainable industry. This included 53 articles in tier-one international print and online media such as CNBC, Bloomberg and Reuters, Associated Press, Washington Post, Wall Street Journal and the Financial Times. Additionally, there were 19 reports in prominent regional and domestic publications and countless posts on social media.