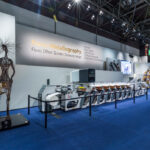 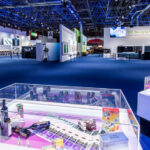 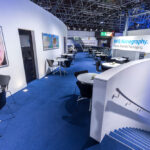 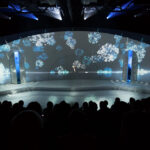 Following the successful launch of Landa Nanographic Printing presses at Drupa 2012, it was necessary for Landa to show the market they had moved from concept to production. For Drupa 2016 their site was almost three times larger than 2012, they approach Goodall Design to once again design and produce their exhibit.

After many months of development with Landa and their many specialist consultants, a final design was agreed and the outcome was a major success; with 200,000 visitors to
the stand, orders of 450,000,000 euros and enormous coverage by all of the trade presses.

The theatre was so successful that the 5 shows a day, each containing an audience of 350 was insufficient for the demand, the presentation was then shown on the many exterior monitors; completely filling the exterior space during these periods. As well as the theatre, the five presses made live demonstrations throughout the show.