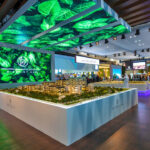 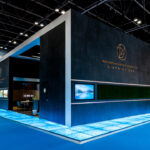 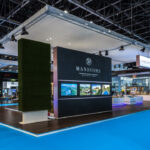 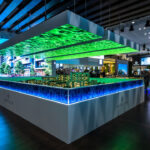 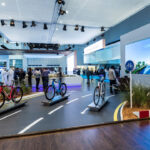 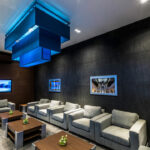 The Meydan Group and Sobha Group formed a joint venture: Meydan Sobha to develop, design and build an entirely new village, or district in Dubai, called: District One.

Meydan Sobha were participating at CityScape Global, which is the most important event in Dubai when it comes to real estate development. The event includes the top developers launching their upcoming projects in the most elaborate ways possible, utilising the latest and most innovative stand design and technology.

Following more than two years developing a powerful relationship of mutual respect with Meydan Sobha, Action Impact were tasked with bringing District One to life, in a manner in keeping with the cutting edge and sophisticated ethos behind the development.

With competition for attention and sales at Cityscape rife, we had to stand out to both attract interest and help our client generate their all-important sales; this latter point being a key objective.

How do you ‘reveal’ a whole new district though?

We had to develop an innovative approach to combining cutting edge technology, expected and popular in Dubai and in abundance at Cityscape, with the elegance and serenity of the District One development. And this had to be done in a way that was relevant, this was no time or place for technology for technology’s sake; an approach that can look impressive yet lack substance. We needed to impress and we needed to offer a real depth of experience.

Our concept came out of an extensive and iterative research and development process. We knew we wanted to ‘uncover’ the hugely elaborate specially created physical model of District One and set the right tone from the outset. A canvas of LED depicting the mood and feelings people may feel if they were in District One themselves would first uncover the model and then float over the model itself changing and evolving with relevant atmospheric content. A canvas of emotions.

Our team of artists and engineers built an entire test rig in a specialist facility and over the course of a number of weeks developed custom engineering that bespoke content and control software that when combined, resulted in LED screens rising and falling from the air in a balletic, poetic and choreographed manner to match the mood imagery on the screens and in turn reveal the model to royalty and assembled guests.

In addition, we developed interactive activations that allowed visitors to sample life in District One and browse the development and building options available to purchase.

The result was to a natural feeling exhibition stand that didn’t shout to grab attention, but naturally enticed visitors to the stand, and, once there allowed them to uncover and discover as much information as they’d like.

Alongside our powerful reveal moment created by our LED screens choreographed above the model of District One, other initiatives executed across the stand amplified our client’s messages.

We created a virtual reality cycling experience where guests sat on bikes on our small section of road. The District One cycling track was already complete. So it was filmed in 360 degree vision & turned into virtual reality content so those interested in the development could cycle around the actual, real life, cycle track & development without having to leave the exhibition stand. The queues were endless!

Interactive architectural models, whilst beautiful & always a crowd pleaser, haven’t evolved much over recent years. We had the models of course, yet we also utilised 3D architecture plans and created an immersive 360 degree blueprint experience allowing guests to experience the unbuilt elements of the development on the stand. A facilitator selected the area or development visitors wanted to look at on in interactive surface and then the imagery appeared on an array of screens arranged through 360 degrees so visitors could see every angle from within the space. This became immensely useful for those guests who had more than a passing interest in the development & wanted useful details. A valuable way of catering for the more detail-orientated potential clients, which produced a many more sales leads from the stand.

Guests who were interested in the history of the development could engage with our interactive & immersive history wall. Various media surfaces, all of them interactive allowed visitors to switch between an overview story or more detailed information about specific points in the development’s history. This proved popular with guests interested in the development as it allowed them to understand more of the culture and background they could be moving into before deciding to invest. Again – a popular addition to the stand that rounded off a complete experience.

The result was incredible: applauded by all those who watched. The stand as a whole, received constant traffic for the duration of CityScape Global, buoyed by the initial frenzy generated by this initial reveal moment; tirelessly created by our team combining both art and science into a final moment.

His Highness Sheikh Mohammed bin Rashid Al Maktoum and His Higness Sheikh Hamdan bin Mohammed Al Maktoum visited the stand and experienced the reveal moment and launch of District One Phase 3, which generated a huge media presence meaning our client: Meydan Sobha were enormously appreciative of our efforts to craft this key moment.
The relaxed ambience across the stand proved popular with buyers and investors engaged for lengthy periods of time with our client’s sales representatives.
The interactive elements were a huge hit too, summarized by a quote from one visitor:

“I don’t think I was very fast. But loved cycling on the bikes with the VR headsets. It also saved me having to drive my family to the District One to see if they liked the environment, really really good news. Thank you.”

It is rare an exhibition stand meets so many objectives so elegantly, yet our work bringing District One into the public arena proves that technology doesn’t have to be just for technology’s sake but when developed with care and attention, can be elegant, often invisible and have tangible, demonstrable benefits too.