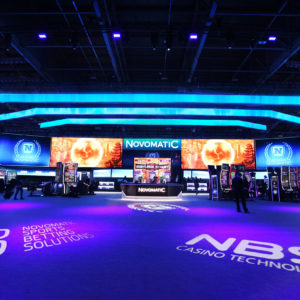 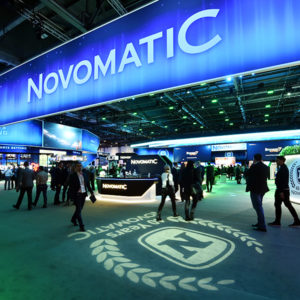 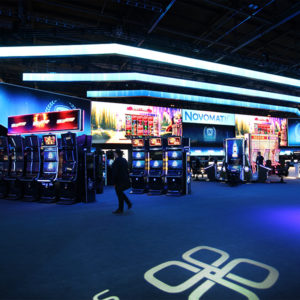 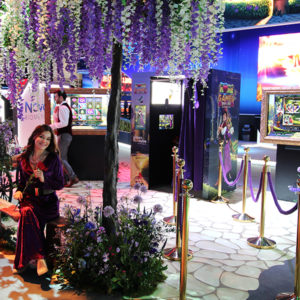 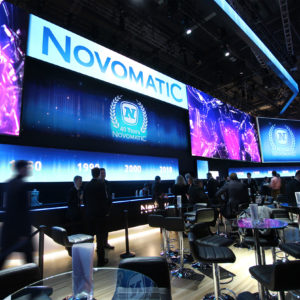 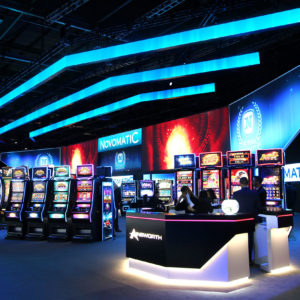 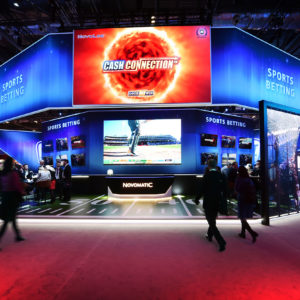 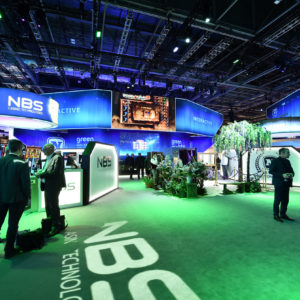 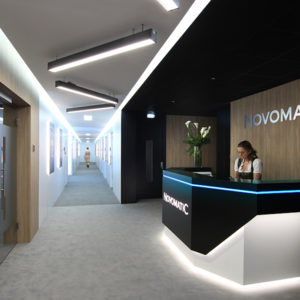 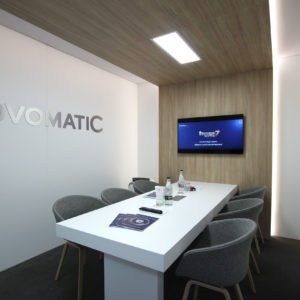 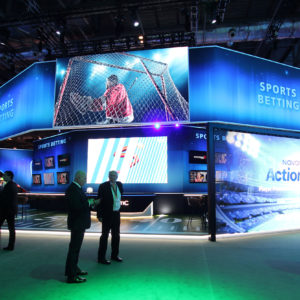 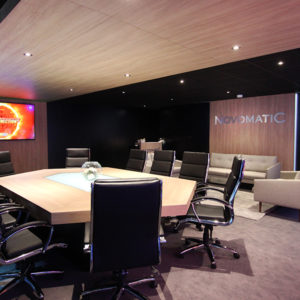 NOVOMATIC AG Group is one of the largest international producers and operators of gaming technologies in the world. Founded in 1980, the company wanted to celebrate its 40th anniversary at the world’s biggest gaming exhibition – ICE London 2020.

The NOVOMATIC stand brief for ICE London 2020 was immensely challenging. We were asked to ‘Showcase 40 years of Innovative Power’ over an enormous space in excess of 5,000sqm. Our client put it simply: ‘Give us a showstopping makeover for our 40th Birthday! Give our customers the ultimate digital experience and demonstrate how NOVOMATIC has developed gaming technology innovations over the past four decades.’

And that wasn’t all … the market leaders wanted their customers and partners to experience a ‘first class’ level of hospitality. Bespoke meeting rooms and business suites capable of hosting meetings for 6 to 30 people were a must!
Catering requirements demanded an intricate balance of ‘VIP gourmet’ whilst simultaneously serving the famous Austrian tradition of ‘beer and Wiener Würstels’ to thousands of hungry visitors during the event!

Lastly and most importantly, the stand needed to promote hundreds of individual game titles without detracting from the impact created by the main NOVOMATIC brand.

Evolve responded by creating the biggest and most ambitious stand ever conceived for the sector. Designed around a huge 5,000sqm open plan arena, we provided an incredible multi-sensual visitor playground which set a new benchmark for both immersive game experiences and exceptional business hospitality.

Our key objectives were to give the largest company in the sector an awe inspiring anniversary makeover. We wanted to achieve maximum impact whilst still providing huge competitor differentiation in one of the world’s most visually aggressive shows. Historically renowned for more organic stand forms, we created a distinct new look for their brand identity together with a clear product hierarchy. This allowed us to rationalise NOVOMATIC’s overarching presence and bring together over 20 subsidiaries – uniquely displaying one of the most comprehensive product portfolios in the industry. The foundations of this were based around the concept of taking visitors on a mind blowing 360° journey through the world of NOVOMATIC, showcasing their 40 year history with a digital timeline of milestones, culminating in the interactive ‘Hall of Game’ museum zone – complete with priceless vintage machines!

In such a demanding environment, what better way to impress than to create a virtual casino experience! Inclusion of 6 stadium quality speaker arrays blew away the competition at unique takeover moments. Live and digital content linked seamlessly over 350sqm of transparent and digital LED whilst more than 6,144 lighting control channels dazzled attendees with spectacular lighting displays.

Our amphitheatre concept was conceived around a radial hub and central café area which created an immense sense of theatre. This huge auditorium was filled with a vast array of live and virtual gaming events such as the Romeo & Juliet themed interactive photo booth, a hugely anticipated Biometric area, a series of multiple virtual reality suites and in excess of over 300 different online and land based terminals.

The rear of the space occupied a colossal 61m wide superstructure which provided a stunning backdrop to the overall stand. Towering high above the 20m long public bar and VIP lounge areas at 8.5m, this awesome structure presented the perfect setting for the Casino and Systems terminals. It featured a twin storey Business Centre housing 30 meeting rooms, a stunning VIP reception and lounge area, a secret VIP showroom and an executive boardroom boasting panoramic views of the entire show floor! However, the icing on the cake just had to be the triple band of digital canopies spanning over 60m wide, broadcasting content and tweeted messages throughout the event!

Behind the scenes the infrastructure was no less impressive with a professional grade kitchen, food store, refrigerated cold room – and that’s without the staff rooms, cloakrooms, storage rooms, central server room and even a control hub for our ‘onsite standby’ technical team!

Building and de-commissioning this enormous stand in such tight timeframes takes exceptional coordination and an incredibly skilled, focused and committed team of people. To guarantee its success we employed 3 on site Project Managers, oversaw a 100+ person build team, organised and unloaded in excess of 50 articulated lorry trailers and brought together nearly 300 tonnes of construction material … and then packed it all up again – in just 36 hours!

‘Working with Evolve was a tremendous opportunity and as always I’m the one that throws the curve-balls and Evolve knocks them out of the park. The whole team at Evolve keeps coming up with great ideas, often ideas that we didn’t think of and going with them really paid off!’

‘Judging by the attention our stand attracted yesterday, we’re on track for another year of strong growth.’

According to ICE Style Magazine, ‘The NOVOMATIC stand is recognised by the industry as the centre piece of the Gaming World itself’

These were just some of the rave reviews that the Evolve team received after successfully delivering the biggest stand at the show – the only thing more impressive were the stats themselves:

– Massive year on year visitor number increase, with 2020 hitting over 40,000 visitors!
– Exceptional levels of generated new business with more than 500 formal meetings held!
– Over 10 tonnes of catering consumed with more than 9,000 sausages devoured and over 5,000 pints poured!
– Rigging and lighting benched in at over 70 tonnes – more than some complete shows!
– Enough combined cabling to stretch around Wembley Stadium over 50 times!
– More than 6km of CAT6 cable and over 2km of glass fibre cable was installed!

And finally, the icing on the cake for NOVOMATIC couldn’t have been any sweeter than when they scooped the internationally coveted golden trophy ‘Casino Supplier of the Year’ award … for the third year in a row!

What more can we say!