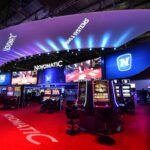 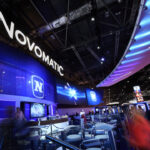 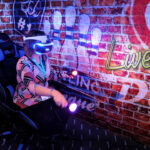 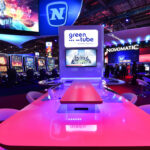 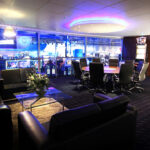 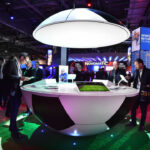 Novomatic are the number one company in the Electronic Gaming World and in 2018 they gave us the ultimate brief objective of designing the ‘biggest customer experience ever seen at ICE Totally Gaming, as well as a stand that could define their sector leading position!

Our objective for the Novomatic stand from day one was to give the biggest possible impact and presence at the show and we set our sights on developing a concept that would have the potential to become the very centrepiece of the entire show and the one stand that every visitor just had to see!

Firstly, we were looking to create a concept that had a massive ‘wow’ factor, combined with exceptional quality and huge competitor differentiation in one of the worlds most visually aggressive shows.

Thirdly, the stand had to accommodate at least 25,000 visitors across the entire show, incorporate a double deck business centre, more than 30 meeting rooms, information zones, two kitchens, and a very large bar area for 150 people with full VIP facilities.

This huge display arena and all the associated stand elements then had to be built in just 5 days and de-commissioned in just 3.

The stand design solution was built around the concept of taking visitors on a mind blowing 360deg journey through the world of Novomatic and their latest product launches. The stand had to offer an overload of the visitors senses and so we wanted to create a virtual casino experience closer to an imax cinema event than any traditional exhibition stand!
The main title launch for Novomatic was based around the international DJ Hardwell and the amazing DJ Set he was booked to put on at the O2 arena. We targeted this event very early on and made the decision to recreate it on our stand as the ultimate product launch with the capability of bringing ICE to a standstill!

The stand arena itself had to accommodate such a huge array of differing events and gaming formats we knew that the space had to be big! But at 4,600m2 we immediately realised that this was the biggest gaming stand ever conceived and when we presented this reality to Novomatic they loved the drama and sheer scale of the vision!

So the final design vision was conceived around a massive radial hub, where the VIP business centre and all four international hubs would have their own satellite environments. At the centre of this hub would be a live performance stage directly linked to the panoramic 360deg video screens around the edge of the arena. This allowed us to bring the stage based product launches to a massive audience and turn the entire stand into 1 huge theatre or small scale O2 arena.

On such a huge stand we were very concerned about the flow of people around the space!
This challenge led us to the idea of a runway through the entire space where the stage and all information hubs would be based and at its end would be the VIP Business Centre. We loved the idea of visitors and guests promenading through the space, feeling like a million dollars while on their way to the main stand facilities!

Radial Stand Concept and Stage
Our final concept for the stand/arena was based around an amazing radial-hub footprint with a dynamic presentation stage at the centre of the space. The design featured no less than 350m2 of video walling, positioned right around the perimeter of the 4,600m2 radial stand creating an amazing digital amphitheatre.Regional Stands
Each region received its own independent stand alone pod to allow for a delineated brand hierarchy and ease of identification for visitors. These were positioned at each corner of the arena space and included dedicated backdrops, presentation video walls, specific meeting rooms, bar and café area.The Promenade & Business Centre
Running through the centre of the stand was an illuminated ‘promenade’ to lead visitors through the amazing stand facilities, while giving them the opportunity to access 3 information points and enjoy the spectacle of the Novomatic arena before they reached the crowning glory of the stand, its beautiful double deck VIP business centre and bar. This immense facility included a first floor boardroom, 34 meeting rooms, cocktail bar, reception centre, 2 kitchens and a public bar serving 300 people.The Gaming Playground
The massive gaming playground accounts for 65% of the space and is filled with a huge array of live and virtual gaming events to promote new titles and bring the excitement of online and live gameplay to the audience. We developed a crazy live inflatable football shootout with virtual betting, even a Batman Begins theatrical set. All of this was built against the backdrop of a real Las Vegas style environment with over 300 differing gaming formats, while two virtual reality suites brought the playground bang up to date.Build
Implementation of this stand takes exceptional co-ordination. Our team spent 3 months planning the show and we employ 3 on-site PMs, a 100 person build team, we use 44 lorries and over 250 tons of construction material.

It was an immense undertaking but the ROI and feedback from our client was equally immense!

So what does innovation look like?
‘The Novomatic stand is recognised by the industry as the centrepiece of the Gaming World itself. The sheer size and zoning model that Evolve employs allows Novomatic to demonstrate the vast variety of products across all 18 international subsidiaries including: casino products, cash management solutions, arcade and pub products, sports betting and lotteries plus interactive solutions and on-line betting platforms. So what does innovation look like? It looks like the centrepiece of not just ICE but the gaming world itself!’