Nutribiotech at Supply Side West 2018

Nutribiotech at Supply Side West 2018

Best Stand at a Healthcare EventSilver 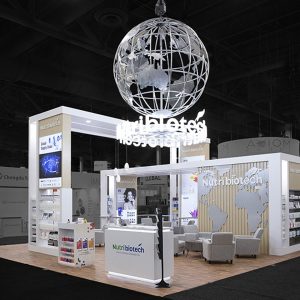 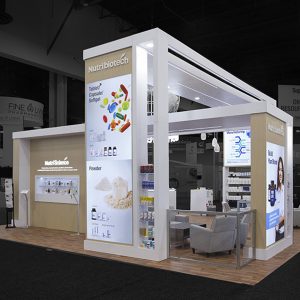 Nutribiotech USA is a global-leading company which promotes a healthy lifestyle and the happiness of their customers. In the past, the client’s exhibits were primarily product centric, but they wanted to change things up for 2019 and beyond. In order to do so, they really wanted to make their presence known on the show floor with a larger exhibit that included a semi-private meeting room. The client also wanted to make sure that the custom exhibit design would clearly reflect that Nutribiotech is a global company with locations around the world.

To reinforce the global theme, the booth includes a map wall with light toned, vertical wooden slats and sheet-metal, profile cut shapes of the seven continents. Additional wooden accents are included throughout the exhibit, including the walls and flooring. With Nutribiotech’s business being grounded in science, white accents and sleek design throughout the space served as a nod to the “lab environment”. While brainstorming ideas with the client for the exhibit design, The Trade Group suggested including a hanging 3-D globe sign over the display, and Nutribiotech loved the idea; however, it had to be as rich in appearance as the exhibit. Thus, a custom, open-framed metal globe was crafted of sheet metal components that were custom cut and artfully bent into shape.

White accents are also featured prominently in space, including the product displays, counters and the exhibit structure itself. The white, light wood and metal accents contrast nicely, while two intersecting bridge structures provide further visual interest and reinforced the modern vibe. The end result of the creative brainstorm was a stunning, 8-foot-in-diameter, spinning globe with blinking beacons that represent the company’s global HQs in South Korea, Australia, China and the U.S. The hanging sign also featured the company name spelled out in glowing 3-D letters, positioned in a circle directly underneath the globe. The giant, spinning globe was just one of many aspects of the booth where lighting came into play, including light boxes. Several light boxes with branded graphics are utilized throughout the space. The light boxes really grab attention and were also served as the walls for the semi-private meeting space. From a design perspective, the client really liked how the light boxes contrasted with the white and wood accents in the booth. The Trade Group’s design team didn’t hold anything back in the lighting department. The space also included puck lights and pendant lights shining down from the bridge decks, as well as LED strip lights running along the upper edges of the exhibit structure.

Special attention was paid to the floor plan and providing enough room so guests could easily maneuver throughout the open space. Along with the semi-private meeting room, the booth also included plenty of seating to relax and converse. Comfortable natural-toned chairs complement the white, wood and metal design palette nicely, while encouraging guests to stay awhile. The client was delighted and had a very successful show. They received a ton of compliments on the design, especially the custom spinning globe sign, which ended up being a prime photo opp stop for event attendees. The globe that The Trade Group designed for the booth was such a showstopper that other exhibitors complained it was a distraction. The design definitely checked all of the client’s boxes!