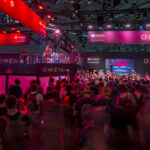 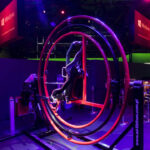 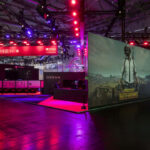 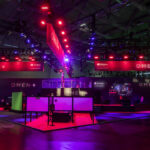 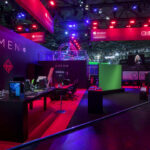 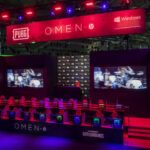 Omen by HP wanted to create a key event activation to engage gamers across EMEA and position Omen by HP as being a Hardware Partner of choice for e-sports fans and competitors of all levels. They wanted to build brand equity and advocacy in the space in this specific parallel market segment.

The Booth components were made up of the following key chapters; e-sports, hardware, stage, experiential, competition, spectacle and social. Each of which delivered experiences in their own right as well as worked as an all up narrative.
We had a big hero key attractor that stood high above everything and formed a lighthouse attractor to the booth with the Omen Stratosphere, but then once within the booth experience drew the audience in to engage which was followed up by beneficial education and support around product selection and training. This was all underpinned by the on and off booth e-sports competition embedding Omen by HP as a key player in the e-sports space, as well as extending the reach off booth with on booth content to millions of audience followers around the world.

The spectacle, an Amazing Omen Challenge testing you to take on the amazing Omen by HP Gyroscope to test your dexterity and orientation. This was positioned at the center of the booths as a key attractor and focal point for the audience and draw them in. We have at each event a competitive e-sports component highlighting at Gamescom with a major Finale that was broadcast to millions live from the booth. Competitors were teamed with one member on booth and one remote, and one being a Pro and one being an Amateur with significant Prize Money. The stage featured key entertainment-based content, as well as Educational content aimed specifically at the competitive gamers, Omen by HP’s target audience. There was a hardware experience zone supported by Genius Style Ambassadors who could recommend the ideal hardware and upgrades to suit your needs and well as set up tests for you whilst on the booth. Key social shareable experiences were throughout from both the gyroscope capturing you being gyrated to 3G in force, as well as a dedicated PUBG photo op as the official content partner of the booth.

All targets were smashed and we more than doubled the number of impressions and engagements by taking this approach and format.

The key chapters of e-sports, hardware, stage, experiential, competition, spectacle and social ensured that whatever the size and scale of engagement and budget we always maintained a base level of engagement for each and every booth and booth impression, and as such created a much stronger unilateral all up campaign through an events program. This now springboards the success in to the future to achieve and even greater set of results and market share growth.