Best Stand at an Agriculture EventPlatinum 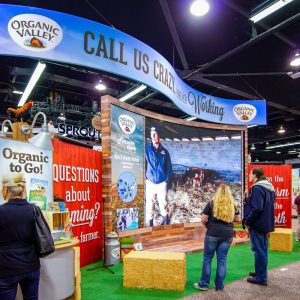 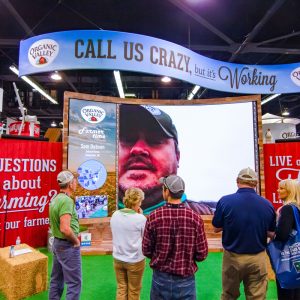 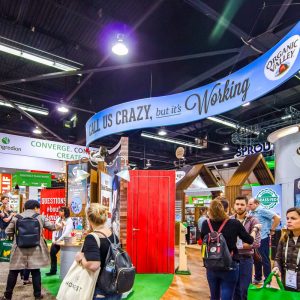 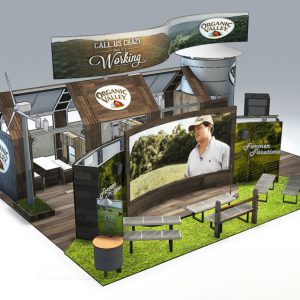 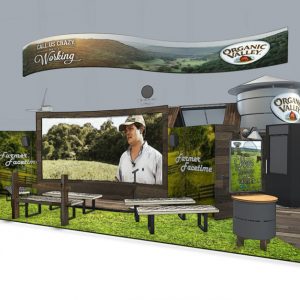 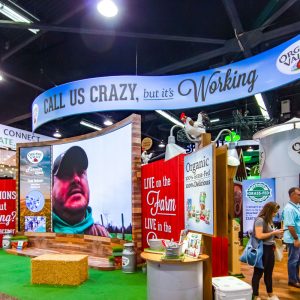 With NPEW being a private trade-only event, the potential to drive quality leads and build upon existing relationships was a major goal for Organic Valley. The expo also offers a large opportunity for media exposure, so a key consideration is how to create a buzz on the crowded show floor that media will gravitate towards. Organic Valley also identified a decrease in visibility on the show floor along with low engagement on social media as an opportunity to boost education opportunities across the board.

Organic Valley was eager to create an interactive activation piece that would bring consumers, retailers, and general attendees visibility into the farmers and farms who put their blood, sweat, and tears into each day to produce the organic products. In the past, Organic Valley has offered Virtual Tours of the farms along with raw footage videos, but they wanted to offer the audience something more real-time and interactive than before.

To support these goals mentioned above, the overarching goal of increasing engagement at the booth and educating the audience on farmer-owned cooperative led the team to revisit the FarmerTime activation developed at a smaller scale for previous events. ASTOUND created a custom face-to-face application, that mimics FaceTime, which we named FarmerTime. The FarmerTime feature was positioned front and center in the Organic Valley booth, facing a main aisle that helped draw in a lot of passersby. Although in the past the FarmerTime application has been represented on an oversized iPhone kiosk, the decision to scale the feature up was integral to increasing engagement with larger groups and overall brand awareness.

It is important to note that Organic Valley is an organic food brand and independent cooperative of organic farmers based in Wisconsin. Founded in 1988, Organic Valley is the nation’s largest farmer-owned organic cooperative and one of the world’s largest organic consumer brands. So this means the farmers are the actual faces and primary contributors to the company and its growth. With a lot of focus put on the real people and farmers that make up the Organic Valley family, it was important to provide a human interaction between attendees and the company on the show floor. Feeling like you were on the farm with the farmers & animals, where the attendees could ask direct questions, was a large draw to the attendees and exhibitors alike and further supports the dedication and value that the farmers give to the company.

The full area of this interactive space was approx. 20’d x 40’w (the upper half of the booth space). Along with the other physical booth components, ASTOUND also created a custom, 33’ curved structure to hold the LED tiles, which made up a 16’w x 9’h screen.

ASTOUND worked directly with Organic Valley and STAMM Media to determine how we could replicate a FaceTime application between the farms and the attendees on the show floor. After rounds of testing the custom ‘FarmerTime’ app from actual convention centers and real farmers’ fields, the team was able to determine what equipment was needed to ensure the best possible connection between remote farms and crowded expo halls. Inside the physical booth space, some of Organic Valley’s very own organic farmers were present to help facilitate the interactions between the farmers on-screen and the attendees – prompting questions and leading engagements.

Overall, the massive LED screen, along with the farmers on the show floor (who led the calls with the farmers on screen) was a huge hit with attendees at this agriculture event. Organic Valley increased their number of leads by 215.69%, going from 51 leads in 2018 to 161 leads in 2019. Organic Valley was a frequent topic of conversation on social media throughout the week. In a Twitter search of “Expo West” and “Organic Valley” (including handles and hashtags) between March 4 – 9, we tracked:

● 333K impressions (total amount of times a post/Tweet was seen in someone’s feed; impressions are typically higher because it includes individuals who may see posts multiple times due to shares, retweets, mentions, etc.)

Organic Valley also received 2K+ impressions on their Instagram story from the show floor of NPEW.

They also received a total of 10 mentions from NPEW 2019 attendees sharing their own FarmerTime experience to their personal channels.

This booth has also earned itself an EXHIBITOR Magazine Sizzle Award in the Traffic Builder category and is currently a Finalist for EXHIBITOR’s Portable/Modular Awards under the Best Use of Technology category.