Otis Elevators – ‘Made to Move’

Otis Elevators – ‘Made to Move’ 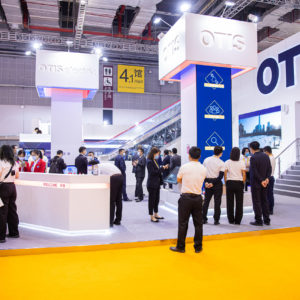 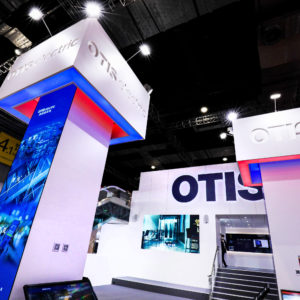 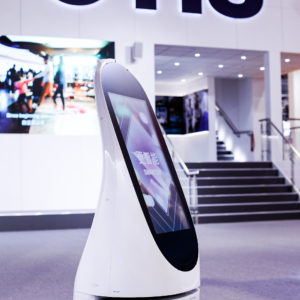 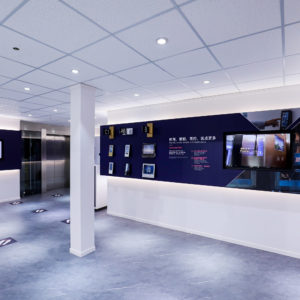 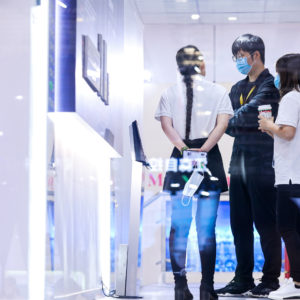 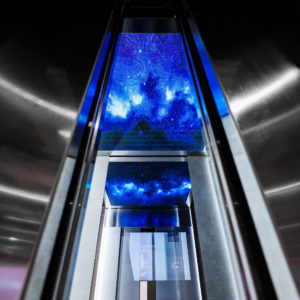 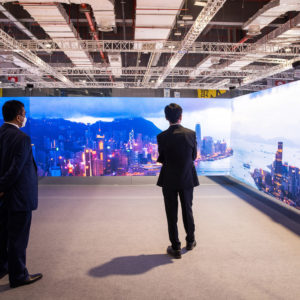 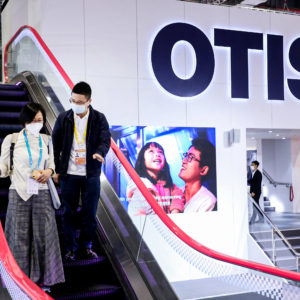 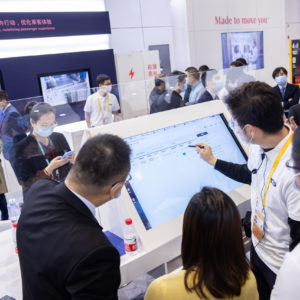 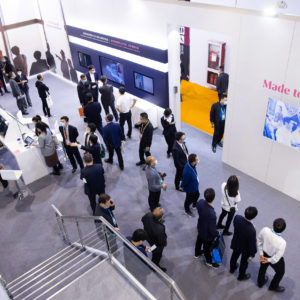 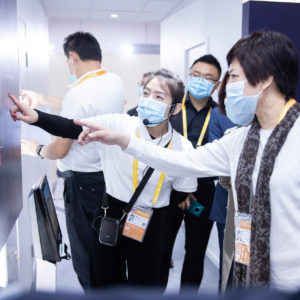 Otis’s strapline is “Made to move you” and refers to emotional touch as well as physical movement. This sense was woven through their brief. Their 400sqm stand would comprise four zones over 2.5 floors with the centrepieces being a fully operational escalator and lift. These would take visitors to and from a viewing platform hosting stunning video and mirror walls displaying a rooftop cityscape.

The key themes to communicate were digitisation, innovation, and user-centric technologies like the Internet of Things (IoT), 5G and AI. As Otis’s first participation at this event, it was vital they made a strong impression on the 300,000 plus visitors who would attend.

The brief presented a unique technical challenge in stand design to accommodate the operational lift and escalator, while COVID safety added ongoing complications. These included travel restrictions which meant the project had to be managed remotely over three time zones; stand design to facilitate COVID-safe people flow and social distancing; and exhibit displaying which minimised contact with surfaces.

RTH has successfully worked with Otis before, including in China at the 2018 World Elevator and Escalator Expo (WEE). They were so pleased that it was the starting point for the creative solution to this 2020 stand.

The overall creative idea was to take delegates on a complex journey through four sections. The first was the welcome area, dominated by two striking digital towers which immediately resonated with Otis’s mantra of “Taller, Faster, Smarter”. Here, there was a welcome desk and exhibits that told the Otis story, providing helpful context for visitors.

During planning we were informed that a keynote speech would be delivered on the stand. We amended the designs to include a stage and media wall in this welcome area to accommodate this.

Up the steps into the second section where some of Otis’s world-leading innovation was on display. The creative idea here was to have people feel like they were immersed in a skyscraper. With the presence of the lift entrance it felt like a lobby area.

Particularly timely, given the pandemic, their gesture control technology was on display, which allows people to call lifts with simple sweeps of the hand. VIPs could also understand how they could specify their product orders aesthetically and technologically in this part of the stand.

Next, visitors would experience the dramatic centrepiece. A fully-working lift was kitted out with a video ceiling to give passengers a heighted sense of movement as they travelled to the viewing platform above. This was fitted with state-of-the-art video walls (made more immersive with the use of mirrors), displaying stunning panoramic skyscraper vistas.

Even so, the addition of a fully working lift and escalator on a temporary stand represented quite a challenge – one that would influence the design of the whole 400sqm space. To accommodate the elevator pit it was necessary to raise part of the ground floor significantly, as excavating the concrete floor of the exhibition hall was out of the question! The raised level had implications for building regs concerning the design of steps which we carefully incorporated into our plans.

Delegates returned to ground level using the escalator where they concluded their visit at an Internet of Things (IoT) display, showcasing more of Otis’s innovation and technology.

As you would expect, COVID-19 posed significant challenges to both the planning and execution. We’re really pleased to have met these head on, and delivered a stand that showed no discernible compromise.

For example, touch screen technology was still used but with styluses to reduce contact. Three robots which were originally intended to serve drinks, were still able to feature and wow visitors, but as contactless concierges. And while the fourth section was originally intended to be conference rooms, social distancing measures required airier space. It actually made for a more open stand with better asset visibility.

In terms of logistics, an RTH director was due to fly out and oversee operations, but visas were impossible to arrange. So, working remotely, we went to great lengths to coordinate daily comms with both our client and the on-the-ground team to ensure a well-run project, despite the time-zone differences.

Months of hard work and complex planning paid off and the show went without a hitch. This was extra pleasing given the backdrop of the pandemic. But through channels like Zoom, WeChat, WhatsApp, live stand cameras, Webex and good old-fashioned email we overcame the physical limitations on travel and contact to communicate effectively on a daily basis. We’ve never known a project of this scale to be managed remotely before.

On the stand itself, all our COVID-security precautions helped to put delegates at ease without detracting from the experience.

The stand was a great success for Otis with thousands of professional visitors recorded during the event. The impact was considerably enhanced by social media exposure and media coverage. More than one million social exposures and approximately 17,000 engagements were monitored, while about 1,500 media clippings were captured, including several for China Central TV.

With its keynote stage and extensive dazzling AV, the stand proved a striking setting for a range of media engagements as well as a much-viewed webcast. Journalists were able to conduct interviews and walk around to see Otis’s market-leading products and cutting-edge technology.

Commercially, the stand delivered return on investment too. A $2 million handshake was completed on day one, and further orders were anticipated. In an added twist, one key customer liked the exhibits so much they purchased most of them after the show to recreate in their own showroom!

Otis were delighted, indicating that they are looking forward to working with us on future events.