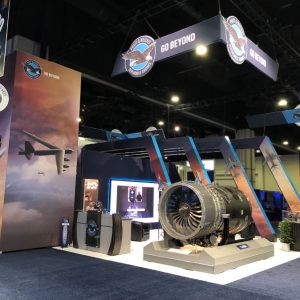 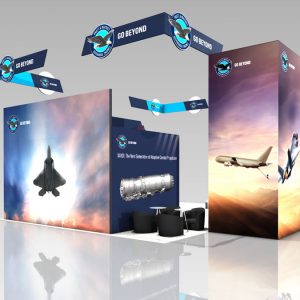 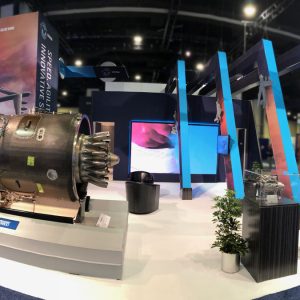 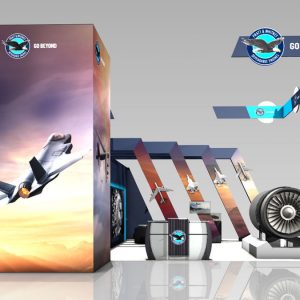 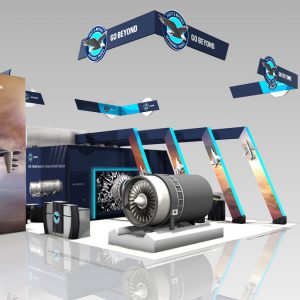 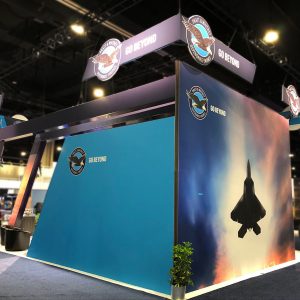 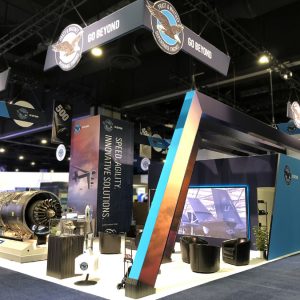 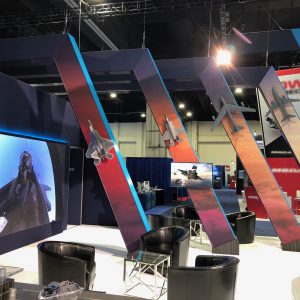 Pratt & Whitney recently went through a major branding refresh / update. This event would be a roll-out of a new unified company look; the directive being to reflect their stated purpose of how powered flight has and will continue to transform the world.
To incorporate Communications elements from their new graphic design guide such as the eagle logo, for which they are renowned, their “graphic device”; an iconic element consisting of four lines advancing upward embodying their purpose and ideals of “Go Beyond”, their new tagline, as well as new colors, needed prominence. These were to be used together to help create a WOW factor to the booth design.
For budgeting purposes their existing conference / storage room walling panels, which have a large foot print, needed to be reused and updated. A large full scale jet engine was also required to be front and center within the booth space.

Starting with the footprint of their conference room and full sized engine, were were able to create a space that was both informative and welcoming.
By bringing the 2D “graphic device” element into the 3rd dimension, we were able to incorporate four space defining “Bridges” which incorporated colorful graphics, a lounge area, 1:20 scale aircraft models and a custom interactive touchscreen program with highlights and features of their advanced jet engines
A 7×4 high resolution video wall added to the “WOW” factor by showcasing the latest marketing campaign videos on super bright direct view video tiles.
By utilizing established partnerships with trusted key vendors, we were able to coordinate the extremely short production schedule to our advantage and were able to hit our deadlines.
Creating & presenting four concepts within budget which captured their advert look and feel. Then incorporating their products and requirements into the final booth design.

Working with Aluvision, we were able to determine the kit elements we needed to bring the concept to life.
Custom display elements were put into production with trusted fabricators to hit our tight deadlines.
We worked closely with our fabric provider, getting them the custom frames in advance to ensure a perfect fit.
Close coordination with our AV provider resulted in a beautifully installed and executed LED tile video wall for our clients presentation.
All elements came together just before the show so we were able to work out minor details during setup and really provide an exciting new look for Pratt & Whitney

The booth was well received by all Pratt and Whitney personnel that attended the show. They were very happy with all the elements of the new look;

The addition of the full scale (PW800) engine as part of the booth display was a huge “draw” that increased the amount of foot traffic around and throughout the booth, significantly over the previous years display.
This was also a valuable tool for the PW personnel to be able to use during conversations and meetings.

Booth staff found the addition of the new large archways very impactful.
The scale model aircraft displays that were mounted to these arches helped potential clients visually relate to the airframes which Pratt’s engines are directly used on.

The large LED wall and the content shown brought many show attendees into the booth space. Once inside the booth space, most attendee’s stayed for the duration of the video content.
The video wall and media content was also useful to PW personnel as a tool to point out capabilities of certain engines.

The high level branding of the enclosed structural column and hanging signs on all 4 corners of the booth space could be seen and provided brand recognition throughout the exhibit hall.