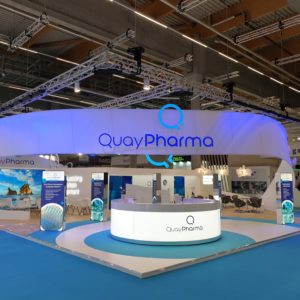 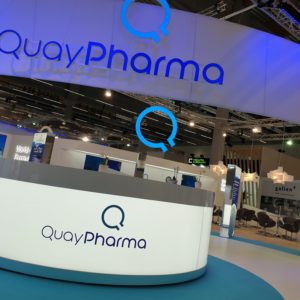 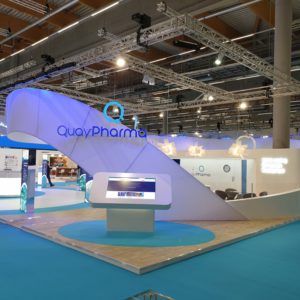 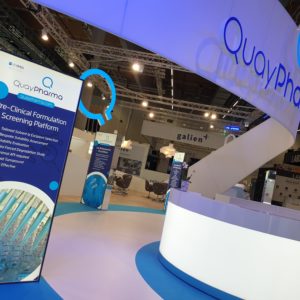 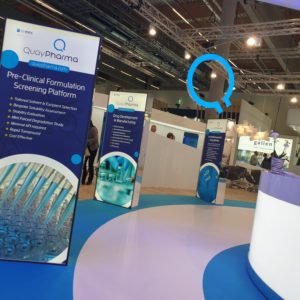 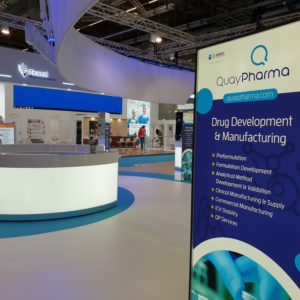 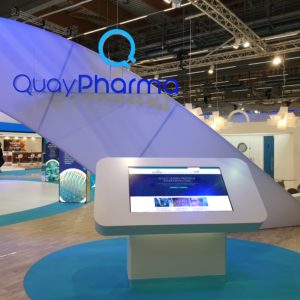 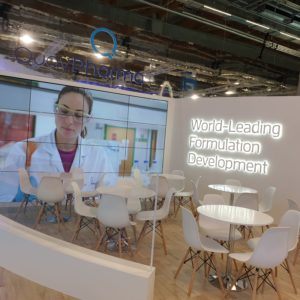 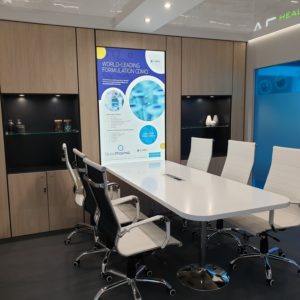 Quay Pharma is an independent, privately owned company with the scientific expertise to respond flexibly to each new challenge, and give every project the best possible chance of a successful clinical trial.

This is the largest exhibition space booked by Quay Pharmaceuticals so far and represents a commitment to growth and stature in a specialised field. The stand size is 223.62sqm containing 1 pillar (fixed) and is open on 3 sides.

Often referred to as the WOW factor, Quay Pharma want exactly that for their 2019 CPHI / ICSE stand.

1. Unique – To simply be different, Quay do not want to be represented as a run-of-the-mill solution with an average stand.

2. Memorable – Quay want people to leave the hall with their stand in the forefront of mind. It is requested that the creative process is approached with ‘striking’ as a major ingredient. Quay want to be the Eiffel Tower, the Guggenheim or the Gherkin…

3. Interaction – Engagement opportunities that deliver interest and intrigue in the problems Quay solve is thought to be a valuable asset to the stand.

4 The Brand – The general colour schemes in recent years have represented large spaces of white with the accompanying corporate colours delivering light focal points and panels with graphics and supportive service listings, the aim is to maintain that brand continuity and a professional representation.

The aim was to tackle the notion of WOW head on. It’s a frequently requested outcome for live event design, but how is it defined at a healthcare exhibition? What is possible? What will the budget allow for? and how do we draw the line between the professional nature of the healthcare sector and the potential to produce over-the-top creative goodness?

From the brief, the key words that stood out were obviously “unique” and “memorable”, but what other terms can we marry in from the sector? What, at a glance, could become synonymous with the medical surroundings and Quay themselves…? Experimentation? Complex structures? the almost Impossible? Innovation? … yet calm, organised and professional.

This was an opportunity to be ambitious and forward thinking.

We chose to challenge convention and create what would seemingly be an ethereal wave of confidence. A structure designed to float above the surface of the stand tying together the overarching brand space with the business offering below, connecting and enveloping the entire space.

A complex engineering challenge made to look effortless and serene… calm, organised and professional…. but at the same time WOW!

Inspired by the beauty of nature and complicated organic shapes the wave offered us the opportunity to create a unique and memorable impact through branding and theatrical lighting.

It also provided us with an efficient method of producing a large structure in a reduced time. With an available site installation of only 4 days, it became clear that the delivery had to be supremely efficient, and within that the design could play a major role. The lower built elements were designed to be modular and minimal, but using characterful materials such as mirrored laminate to do much of the work. The floor structures and the wave were designed so that they could be assembled simultaneously without interfering with each other, the wave was then simply lifted above the stand, all whilst not inhibiting the overall impact of the design.

The wave itself was a completely bespoke element. An engineered aluminium subframe, designed completely in house by Formation with a stretched fabric sleeve to wrap the surface. Pre-fabricated and assembled prior to the show to ensure a perfect solution and an efficient and timely installation.

Within the stand itself the use of a simple colour palette was crucial to retaining the notion of innovation and experimentation, a light and polished space, inviting the visitor, yet at the same time providing elements of brand impact and engagement.

The use of an LED video wall flooded the space with light, creating atmosphere and excitement with engagement.

Interaction and invitation achieved via a large touchscreen platform, allowing for that initial walk up engagement and connection.

LED graphic totems created a beacon like journey into the space, uncluttered and unfussy… but powerful.

Simple details, such as 3D lit lettering, custom made pendant lights, coloured glass and bright punchy reception counter made for a more than memorable experience.

Every view of the space, both internally and from the aisle, was unique. Almost like a complex puzzle unfolding itself.

Beyond the visual impact, it was also important to address the functionality and usability of the stand.

Two executive private meeting rooms were created, with as much attention to detail as the rest of the stand. Custom made furniture, full connectivity and hospitality provision.

A hospitality counter was created to service the open discussion areas, which were divided into to quick succession meeting areas and relaxed lounge interaction.

The open space allowed for a welcoming and free flowing atmosphere within the stand, visitors able to clearly see what the regions of the stand were for and how they intend to use them.

The design was audacious, from a concept focussing on impossible, complex, yet beautiful structures to a result which genuinely achieved a “WOW!” response from the visitor.

A flawless installation, achieved in 3 days allowing for a full client day on the final day of build.

And one extremely happy client!

It was a real pleasure to accept and execute this project, the client left the the floor open to creativity and experimentation and their trust and support is the real reason this project was such a success.

Quay Pharma enjoyed an extremely successful show in 2019. New business deals were signed on the stand with companies such as ACINO.

Visitor numbers were increased by not only stand layout, but also by the increased floorspace and attendance at the show. This was listed as a contributing factor when discussing the growth of the Quay team and capabilities experienced in late 2019 and early 2020.

Quality visitor data was increased by the use of badge scanners and the custom touchscreen application.

Of the members of the Quay team questioned on the stand in Frankfurt, all of them commented on how busy the stand was compared to previous years, how much longer the visitors were staying and the quality of the conversations. Visitors were impressed by the design and quality and many of the team and top management commented how it was the best stand they had ever head.

It was evident from the use of stand imagery in Quays social media feeds that the stand was an element of pride for the organisation, it provided an excellent backdrop for content and was even used in the companies New Year posts beyond the show.

From Formations perspective the project was a huge success. We answered the brief and beyond, we achieved an in-budget delivery with a flawless install, well within the contracted time limits. We gained a new and exciting client … and we received the biggest smile from a CEO we’ve ever seen ! (which was actually the best part). You can’t really put numbers against that 🙂

We look forward to doing it again soon 🙂 See you there !