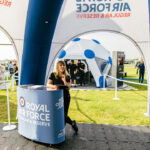 Inspire eligible candidates to consider a career in the RAF, by engaging them with a highly emotive, awe-inspiring taste of the extraordinary experiences and opportunities the Royal Air Force (RAF) has to offer.

Position the RAF as a cool, technology-led and innovative employer, an exciting, aspirational and pioneering organisation.

Showcase the multifaceted nature of the RAF; the breadth of roles, capabilities and opportunities in the RAF, and demonstrate to potential recruits the extraordinary opportunities of life as a serving member.

Harness the appeal of virtual reality to the target audience of 16-24 year olds in an original and captivating way.

Engage audiences of all ages and introduce new audiences to the RAF.

Transform the capability of the RAF Recruitment Force to deliver recruitment messaging.

Create an unforgettable experience that participants talk about with their friends and family.

RAF Op. VR (strapline, See Your Future Take Flight) is a multi-user, virtual reality experience that immerses the user into a day in the life of the Royal Air Force. Showcasing five job roles, it gives the RAF a unique opportunity to offer users unrestricted access to inaccessible situations. The user can vertically take off and fly an F-35B Lightning II, intercept an unidentified aircraft, carry out an aid drop on a disaster hit island in the Caribbean, receive and interpret surveillance in a command centre and set up a mobile satellite communications system. In each custom-built scenario the user is required to perform an interactive task, boosting feelings of involvement with the work of the RAF. A vibrating rumble pack on the user’s seat increases the feeling of immersion in the scene for the user. Op. VR has increased awareness of the range of work that the RAF does and also the breadth of opportunity a career in the force offers.

The audio design was a major element in bringing the experience to life. Extensive references were gathered to ensure authenticity to key sounds, like the Helmholtz resonance, heard as the ramp of the Airbus Atlas A440M opens. The soundtrack is a bespoke creation designed to increase tension using techniques such as a ticking clock and shepherd tone during the interactions.

4D elements enhanced the experience during key moments in the experience. Rumble packs on the seats gave viewers the feeling of what it might actually be like to have an F-35 land in front of them as well as hearing it.

Op. VR firmly reinforces the concept of the current online and social media recruitment campaign that life in the RAF is “No Ordinary Job”. Op. VR has been designed to fit seamlessly into this campaign and extends this concept by showing the user that in the RAF there is “No Ordinary Day” and “No Ordinary Job”. Recruitment marketing for the RAF sets a high bar for truly integrated marketing activity. Therefore, Op. VR would benefit from cross-promotion on the RAF recruitment Facebook account, individual event pages created on Facebook and also paid geo-targeted and heavily localised social media. This activity would promote the presence of Op. VR at events and drive traffic to the Op. VR landing page and the RAF recruitment website.

We also used RAF personnel and specially selected event staff to actively invite the audience to take part. Personal recommendations about what to do, what to see and where to go are crucial at live events and this level of personal engagement extended into the event buzz. Part of the success of Op. VR can be put down to the equivalent of earned media channels (i.e. word of mouth). The buzz and demand were both high.

So far 7,225 people have taken part. This doesn’t include the high number of RAF personnel and Air Cadets that participated as well. It is a staggering amount of RAF Recruitment content minutes viewed, 65,025 to be precise – with a consistently high view-to-completion rate of 100%.

10% of respondents to the survey highlighted they had visited a local Armed Forces Careers Office. It’s a big decision, a major commitment, and a compelling result for Op. VR. 50% of those who experienced Op.VR took further action, ie they further investigated or explored the RAF as a career choice.

Our research shows that our audience retained a lot of information from their experience, even months later, including information about the priority trades and roles including the Cyberspace Communication Specialist and Intelligence Analyst, positions which are considered harder to recruit for.
98% of respondents found the presenters inside the Op VR dome to be interesting and engaging, a crucial result in a communications campaign which was built around virtual reality but actually included much on-the-ground human interaction across air shows and events.
45% of respondents said, after taking part, they didn’t realise the RAF did so much. 25% said it changed the way they feel about the RAF for the better. 92% were “really impressed” with Op. VR and 75% say the experience was unforgettable. In other words. Op. VR’s effectiveness comes from the innovation at the heart of the product.

Immediately after taking part more than 90% of those who experienced Op VR learned something new about the RAF while more than 80% said they would now consider a career in the service.