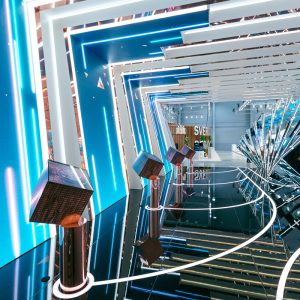 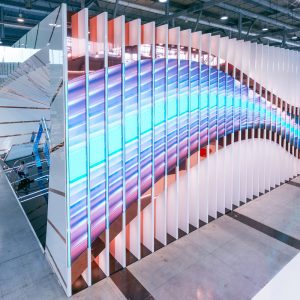 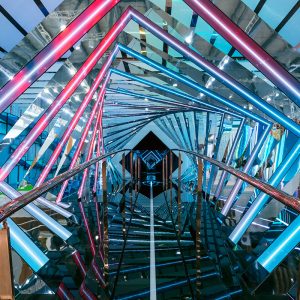 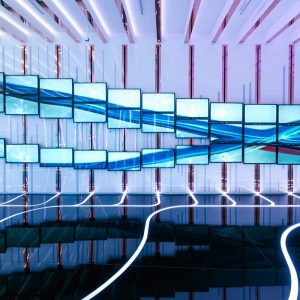 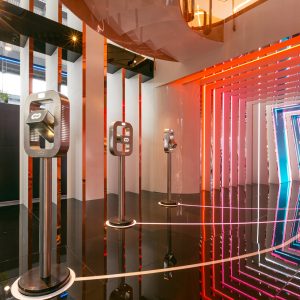 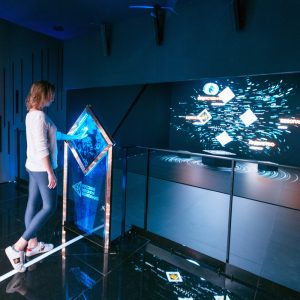 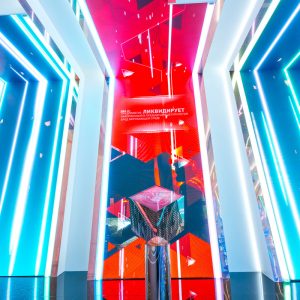 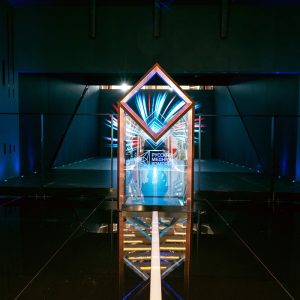 Russian Copper Company is one of the most important mining and copper processing groups in Russia, an international player with headquarters in Yekaterinburg (Russia). The brand is perceived as synonymous of innovation, sound management models, environmental care and many relevant social responsibility initiatives.

Since the foundation of the International Industrial Fair (Innoprom), Russian Copper Company is the strategic partner of this important event, dedicated to technology buyers. Its pavilion is meant to consolidate the brand image and to leave a mark in the perception of both decision makers and general audiences. The participation of Russian Copper Company is always expected as one of the main attractions for its ability to amaze and communicate – every year more and more – with design and top-notch technologies.

The Future Is Getting Closer – under this claim Simmetrico created and developed the project of the Pavilion of the Russian Copper Company (RCC) for the 2019 Innoprom.
For Simmetrico it was an honor to be engaged in design and implementation of the Pavilion for the 2nd year in a row, presenting its values and legacy.

In collaboration with Illogic, the general contractor of the project, Simmetrico implemented a versatile multi-technology structure, where each element harmoniously fit into the overall architectural design, turning the pavilion into a unique communication machine.

The project celebrated the 15th anniversary of successful activity of RCC. High-tech installations of the exposition revealed not only the achievements and successes of the RCC, but also showed its future vision through initiatives and development programs. Innovative technologies turned visitor experience into a fascinating journey, where everybody could literally discover the content with his own hands.

In the design of the pavilion, more than 4 tons of pure copper were used, maximizing the importance of the rough material and making of the company identity the very backbone of the pavilion.

There were no single items that represented the innovation by itself: when innovation is made by integration of technologies the magic happens. This is what Simmetrico tries to achieve in all its projects. All the technologies, presented in the Russian Copper Company Pavilion are perfectly integrated with the design and content, turning the exhibition into a unique, high-tech and wondering experience space.

Simmetrico conceived and realised a boundaryless, welcoming and wondering pavilion where visitors could learn more about RCC. This was an open structure, which allowed all visitors to travel over the content starting from any of its point.

All segments of visitors were invited to enter and interact with custom-made innovative installations, playing with different kinds of content: the history of the company, the main stages of mining, the usage of copper in modern industries, the social programs, the cutting-edge technologies which permit to process copper with minimum impact on the environment, etc.

The heart of the pavilion was an 11 m central tunnel – An Accelerator Of The Future – through which visitors entered the exhibition space. This immediately immerged audience into the hi-tech world of the company introducing viewers into the holographic theatre, a showcase of the most projects and achievements of the RCC. Using a specially designed interactive sensory prism visitors could select a particular project and not only see it in 3D format, but also by detected hand movements “twist” the object from different points of view.

The 15th anniversary of the company was presented on the dynamic wall: 45 monitors were moving according to a pre-programmed rhythm and choreography highlighting the main milestones achieved by RCC.

Interactive stations, or “cubes” – a complex technology, presented in a simple and elegant form, invited visitors to learn about the company’s initiatives and delve into real human stories related to the activities of RCC. Selecting the topic on the touch surface of the cube, visitors could see the content appearing on the LED screen in front.

Particularly successful were the VR Binoculars, which make it possible to move in space and time. Interacting with 3D objects we could learn more about the programs and initiatives of RCC. The VR world was developed into 3 different areas: Forest, Gym and City of the Future, according to the company’

The main goal of the project was to consolidate reputation and brand image of RCC in occasion of the 15th anniversary, as well as communicate effectively Company’s achievements, future projects and initiatives.

The RCC television live broadcasted several times per day from Innoprom, keeping the shape of the big portal of the pavilion on the background. The Pavilion itself became a gathering point for all the visitors of the exhibition (professional buyers, stakeholders and tech-friendly public), also serving as official place for RCC MOU signings, business and governmental meetings.

A powerful word of mouth had spread out during the event and the weeks after on site and in social networks. The project was extensively communicated on Russian National Television, national mass- and social media (RCC youtube channel, RCC social media, official websites, magazines and newspapers) while 43,000 professional visitors from more than 90 countries and 60 different Russian regions, 1,500 journalists and influencers have visited the Pavilion personally during all the 4 days of the Fair.

The message developed starting from the claim “The Future Is Getting Closer”, created by Simmetrico, was embodied by all the pavilion’s elements, arriving and striking right at the heart. The future is the place of desire, of design and of change. A place to enter and play without any fear. The working method of Simmetrico, contained in the formula “When wonder becomes narration”, functioned, allowing the creation of a mosaic of stories, or, better, a chorus of stories.