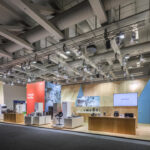 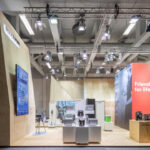 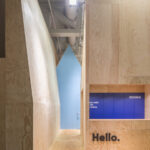 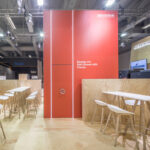 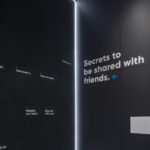 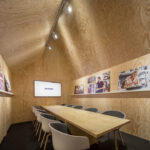 A new openness, the changed, more emotional imagery, a new packaging design and numerous product innovations: Severin, manufacturer of electrical appliances, has managed to rejuvenate the brand in recent years and at the same time present it with a higher quality. For this Severin had taken the brand agency cyclos from Münster on board, which has shaped the new appearance with their designs and strategies. Friedhelm Kuche 360 has worked with cyclos for more than twenty years in the field of three-dimensional corporate appearances.

For the transfer of the new brand message “Friends for Life” to the IFA exhibition stand, it was important to us to bring out the color atmosphere of the new appearance as well as the products themselves. This led to the idea to develop a kind of stage for the modern city dweller in the form of an open-looking urban landscape, which is uniformly formed from a single material and also makes the visitor stand out in it.
The booth is visited by end consumers, but of course also the buyers of large purchasing companies. Trade visitors move in an area that has been withdrawn from the end customer. All functioning exhibited products were presented on contrasting cubic super elements divided into subject areas. In the busy corridor the action areas were settled. The B2B area was inconspicuously decoupled from the end consumer sector in order to reduce hierarchies between the target groups, because the low separation elements are hardly noticeable due to the uniform material. Nevertheless, the stand is always very lively due to the visibility of all visitors.
The central tower, the Future Lab, mysteriously displayed new developments and prototypes. From this developed the idea of ​​a design safe, in whose interior only access to selected subjects existed, which illuminated the product in the darkness and presented it to touch.

Equipped with a detailed briefing by Severin and cyclos, the rough draft was first developed using different approaches to product presentation. In numerous coordination with the agency using 3D renderings, this resulted in a coherent architectural and graphic concept presented to the customer in a small competition. On the basis of our implementation planning, the exhibition construction company Bomfix Messebau-Planungs GmbH in Münster prepared a work plan, which was checked by us before the construction started. During the workshop production, we were in close contact with the client, agency and booth builder to discuss details and changes in the exhibited products until shortly before the start of the fair. We have created samples for materials and their processing, which have been reviewed by the Agency and us. The stand construction was accompanied by us and last was a handover of the finished booth to the customer instead.

The nice conclusion of Christian Strebl, Managing Director Sales & Marketing of Severin, after six days of the fair: 25 percent more contacts with the high-quality retailers and trade opinion makers.
The central tower, the Future Lab, provided an additional wow effect for the specialist buyers. From the numerous visitors there was a lot of positive feedback for the clear presentation of the product worlds, but also for the overall emotional effect of the stand.