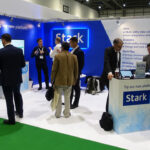 Stark’s new energy management platform Stark ID was yet to be launched at the time of the event. Aware that any messaging about the product launch would be out-dated very quickly, Stark wanted a stand that offered the flexibility of updating sections of the graphics without changing the whole stand for future events.

Stark had booked a 5m x 3.5m shell scheme corner stand at the EMEX, the Energy Management Show, and wanted a system that they could install themselves and one that they could easily store and reuse in the future. Furthermore the system had to disguise the shell scheme, so that Stark’s uncluttered, clean corporate style would not be hindered by a cumbersome background structure.

The EMEX event was a great opportunity for Stark to reveal its new energy management platform, cross-sell a range of services and offer space for conversations with customers and prospects.

In summary, our brief was to supply:

– An installation that would not compromise their limited 17.5 sqm of floor space

Being the first time that Stark had exhibited at EMEX, the stand needed to grab attention from visitors from afar who might never have heard of Stark. As first impressions are so critical, the design needed to overcome the fact that it was shell scheme based. A professional look and feel was essential to emulate Stark’s established market leading position and reputation for high quality service within the industry.

With just 17.5 sqm available to them, Stark wanted to maximise the floor space of their shell scheme so that as many visitors as possible could watch the new product demonstrations on their large monitor.

With over 100 other exhibitors to compete with, it was essential to create a fuss free, memorable design that would highlight Stark’s bold visual identity and stand out in a crowded hall.

Lighting was crucial to making sure the Stark logo was absolutely unmissable. A Shell-Clad specification back-lit LED sign was designed and this simply velcro’d to Shell-Clad’s rollable correx panels (no tools, no support frame etc). This glowing sign added a degree of impact rarely seen on a shell scheme.

Stark’s Kim Walker designed the wall graphics and the clean, corporate style was enhanced by exchanging the show’s bespoke grey carpet, as used by over 90% of stands at the show, to a startling white floor covering that perfectly complimented Stark’s striking corporate blue and white graphics on the walls.

The Shell-Clad system uses simple, pre-velcro’d fixings clips that slot into the vertical pillar grooves, which can be easily removed after use. Shell-Clad estimates that these clips are good for at least 100 uses. Graphics are printed on stoplight material, laminated and then applied to Shell-Clad’s unique 5mm rollable correx panels (known as Magiclad panels). These panels, which are also pre-velcro’d, are removed from their packing tubes, unrolled and applied to the velcro’d Shell-Clad clips attached to the shell scheme pillars. Because the “fix” is down the full length of the panel on each side, a genuine seamless look is achieved. This enables big, bold messages across a wall.

The Stark graphics comprised eight full and one half panel, thus enabling Stark to change elements of their message at a later date without changing all their graphics. In addition, computer cut lettering could be added to graphics at later shows to enable Stark to personalise their graphics to a specific show or audience.

All display cabinets were wrapped in matching Stark branded vinyl and the stand was finished with minimalist white furniture to further enhance the overall clean look of the stand.

Everything was supplied by Shell-Clad as a complete ready-to-install system and the stand was installed (and later removed) by Stark’s own staff using just one ladder and no tools as per the client’s brief.

Nearly 60% of visitors drawn to the stand were interested in Sub-metering; a new service that Stark was cross selling.

Such was the daw of the presentation that the stand was busy throughout the show. At one stage Stark had over 12 potential customers on the stand, queuing to talk to team members.

Over the show’s two day duration Stark achieved a remarkable 15% increase in social media followers and an almost 20% increase in website traffic.

The Shell-Clad display system was deemed “as good as new” when dismantled, so simply packed away ready for another use.

Stark confirmed that the Shell-Clad system had met all their objectives, and had simplified the complexities of show budgeting by proving itself capable to withstanding multiple shows.