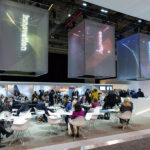 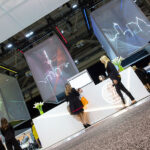 SWIFT is the institution that hosts Sibos, the world’s premier financial services event. The event is made up of a large conference and exhibition. Networking is the main reason for attendance, as well as exhibiting. This places great importance on the exhibition itself. Sibos is the one opportunity of the year for leaders and influencers of the global financial institutions to get together face to face in one place. It’s extremely important to them.

The SWIFT stand is the main hub within the exhibition itself. Spanning 912m2, it’s a key meeting place for visitors, a space for learning, networking and collaboration – a neutral space that’s open to everyone.

We’ve been working with SWIFT since 2014, continually evolving their stand presence and experience. We engage with the multiple stakeholders in order to establish their main priorities, translating these into objectives and develop the creative brief in partnership with SWIFT. We challenge their assumptions, in order to create a brief that represents their true needs.

The brief for 2017 was to provide all the functional elements the SWIFT stand usually offers, but to communicate the three focus areas–the hot topics. These 3 areas captured very simply what the current focus of the industry was all about. Our task was to create and execute it in the most exciting and inspirational way. Our concept needed to attract visitors within the hall, be clearly identifiable as SWIFT, whilst also ensuring it evoked innovative, agile and futuristic thought leadership.

Outside of the brief itself, we decided the concept needed to work harder, generating curiosity and provoking thought. Could the stand itself act as an ice breaker?

Knowing SWIFT as a brand and the landscape of Sibos, we knew this had to be achieved whilst never being flash, or taking attention away from exhibitors within the hall. The line is very thin between underwhelming and overpowering,

We set ourselves a tough challenge, but we love a challenge.

The financial community is facing change on a global scale. There is an explosion of innovators and tech companies who are challenging the status quo. Threats such as cyber security are always present and ever changing. This pace of change means that if you are not keeping up with it, you face being behind the curve. This sets the tone for what takes place at Sibos. SWIFT have to not only make sure they are not behind the curve, they have to be ahead of it in order to demonstrate true leadership and innovation. This requires a presence that facilitates the right interactions, supports their products and services and sets the right tone for everything that needs to take place.

Our aim was to create a presence that evoked strength and commanded attention, but achieved this without being bulky and monolithic. We set out to create an ethereal quality to the space that revealed depth and hidden layers. We strived to create movement and agility, empowering the important messages and to get people thinking and questioning.

Imagine a structure that shifts in shape, reveals what lies beneath and then speaks to you. That is what we set out to achieve.

Avoiding heavy and solid looking materials, we created an environment and architecture that was light and airy, but strong. Simplicity was the key to our creative approach. Simplicity is not easy to do well. It scares a lot of people.

Our approach to handling simplistic architectural structures was to reveal inner workings, to show the depth behind them, unveiling colour identities of the relevant product and services to be showcased. The use of colour, another simple device, tied in incredibly powerfully to the various channels and materials that the different products and services spanned, creating a strong consistency and blurring the boundaries between online and offline worlds. This should be one world.

The layering of the structures was not limited to revealing what lay beneath surfaces. When in solid mode, we applied laser projection in order to communicate very clearly the names of the three areas of focus, animated in a way that made the text appear as if being written by an invisible hand. This provided an extra layer on top of the physical, blurring digital and physical worlds in a powerfull eye catching and unexpected way. The technology was also used to convey simple messages such as announcing the main networking event and a final thought-provoking message, setting the scene for the following year in Sydney.

The combined effect achieved what we set out to do. A stunning leadership presence that was easily identifiable within the hall – a landmark and meeting place, open to all. The environment functioned perfectly, covering all of the various needs and activities that take place at the SWIFT stand. Couple that with the fact that the whole space appeared to move around you, shapes shifting – and on top of that, it spoke to you!

The messages were high level, this was not the place for detail. It was enough to let people know what this was all about. It was enough for them to understand, without telling them everything. It was enough to generate curiosity so that engagements initiated with visitors asking the questions, rather than being approached by reps. It made the roles of the SWIFT staff working on the stand much more effective.

This is the power of good intelligent design based on strategic collaboration between agency and client. A relationship based on openness, trust and respect.

SWIFT serve the financial community, but also represent it. They provide the platform by which financial transactions take place and are responsible for ensuring the global community work together identifying threats and driving change and innovation. This is why their stand is such a key aspect to Sibos.

The SWIFT stand was the busiest it has ever been. Not only that, but feedback throughout the show and following it was overwhelmingly positive. Everybody talked about it! It was the talking point of Sibos, with many visitors coming to the stand because they had heard what people were saying and wanted to see it for themselves.

This curiosity worked exactly as we intended, breaking the ice between representatives and visitors and ensuring that engagements became meaningful extremely quickly. It meant that visitors were able to get to what they wanted and needed swiftly (pardon the pun) and reps were able to help them in the most agile ways possible. The post event data proved that visits were up and the quality of interactions increased. The stand was more productive and efficient than it had ever been before.

The SWIFT stand at Sibos 2017 was deemed such a success, we were asked to reproduce the same again for 2018. We are not doing that though. Having set the bar higher than it has ever been, we can only aim for even higher.

Watch this space. As we said at the beginning, we love a challenge.