Best Stand at a Healthcare EventBronze 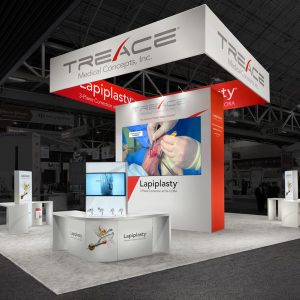 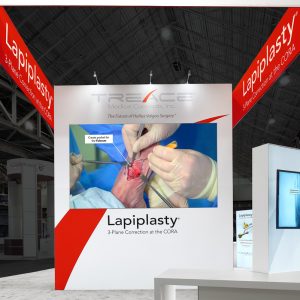 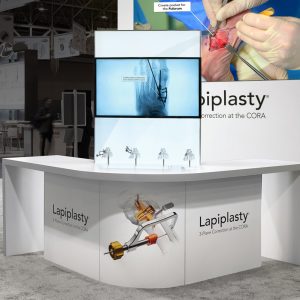 Treace Medical Concepts wanted an exhibit space that would allow them to create an exceptional experience with the show attendants at ACFAS. They were interested in designing an exhibit that would aid and support their goal of informing doctors and other attendees of their products and newly advanced technology. Treace’s primary goal for exhibiting was to grow awareness of their LAPIPLASTY® procedure and products to correct bunions — a slow, painful deformation of the joint causing the big toe to lean towards the second toe and resulting in a protrusion on the side of the foot.

Treace Medical’s LAPIPLASTY® procedure is the first and only procedure specifically developed to correct all 3-dimensions of the bunion deformity, at the root of the problem. Rather than cutting and shifting the bone over as traditional 2D surgery does, LAPIPLASTY® uses advanced instrumentation to precisely reposition the entire misaligned bone back into normal 3D alignment.

Being able to share this invaluable technology efficiently and seamlessly was Treace’s desire to achieve through the overall design and features of their exhibit.

Treace had a 30×40 floor space, acting as a giant canvas for our design team to fill. Since the primary goal was to demonstrate to and inform attendees of the LAPIPLASTY® procedure and products, Rockway’s idea was to create a large video wall that would allow the ease of multiple attendees to comfortably move about the exhibit. Treace would also need space to display and demonstrate their products, which lead to creating multi-accessible stations at each corner of the exhibit to encourage engagement and a space to create meaningful conversations.

It was important that the large space felt approachable and accommodating to a number of attendees at one time. With this in mind, Rockway used Aluvision Hi-LED 55 LED panels for the large, double-sided video wall creating an ease of viewing. The surrounding tower was assembled with Aluvision Omni-55 frames and SEG graphics helping the video wall to stand out and promote the brand from aisles away. The multi-accessible stations at each corner were Aluvision light boxes and custom counters. Each demo station had a monitor and product stands creating a clean and effective display.

The Aluvision Hi-LED 55 LED panels for the large, double-sided video wall was a huge success. It helped Treace to reach and inform viewers and draw in passing attendees to further the engagement. Between the LED panels and light boxes, they achieved a clean and attention-grabbing presence on the show floor — allowing them to focus on engaging with attendees and less on increasing or directing traffic.