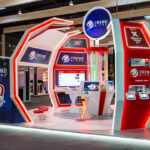 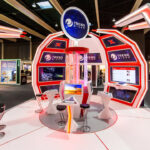 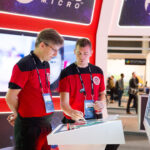 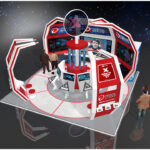 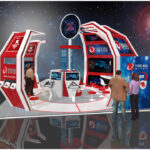 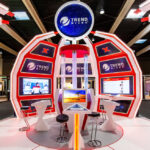 Trend Micro is a Platinum Sponsor of the prestigious VW world event held annually in Barcelona. Our brief for the show is 2017 pushed our creativity to the limit! Trend Micro wanted their travel themed 2016 stand to evolve with a mix of functionality of the demo areas, deliver marketing messages and above all, be disruptive in its design.

A good understanding of our clients’ wider marketing plan was an integral part of our design. We were keen to maintain continuity of messages across all events so that the brand was immediately recognisable to the audience. Our client wanted their stand to be completely different to the other, more corporate designs that surrounds them.

We took the overarching marketing message of ‘X Gen’ as inspiration and developed a space theme; our initial concept developed into a stand reminiscent of a futuristic spaceship. We incorporated rotating headline branding, colour changing water tubes, and edge lit LED detail to the curved lines which formed the basis of the structure. We worked closely with the client as the designs took shape, which gave Trend Micro the opportunity to develop a pre-show marketing campaign.

The internal space was functional – we incorporated individual demo units with wireless keyboards and glass boards for capturing feedback from the audience but the design of these areas transported delegates from an exhibition hall in Barcelona to a planet far, far away! We added a central feature which gave the stand a fun focal point and incorporated large screens for video content, a grand entrance and exit, a split storage space with plenty of space for key messaging to be displayed.

The exhibition was held in Barclelona, so Dijon’s expertise in logistics and delivery played a key part in this successful project; the stand design was complex and intricate – our project management skills ensured a seamless delivery in a timely fashion. Our client was able to spend necessary time navigating their way around the stand and ensuring that their staff were well briefed and comfortable with the theme of the stand.

Everyone at Dijon worked tirelessly to perfect the features; the water feature was checked at every stage during construction and installation of the stand, the LED lit, curved edges were flawless and the client’s technology fully integrated and incorporated into the construction to produce a unique, fun but fully functional exhibition stand.

The client developed a pre-marketing campaign before the show using social media, so there was a real sense of excitement prior to the exhibition opening. The organisers were so impressed with the stand, they decided to use it as the backdrop for their daily show updates. They even hired costumes so that they didn’t look out of place in the ‘out of this world’ environment. There was a huge buzz on social media around the innovative design and functionality. Trend Mirco were over the moon (pardon the pun!) and retained the stand to use at the same show next year.