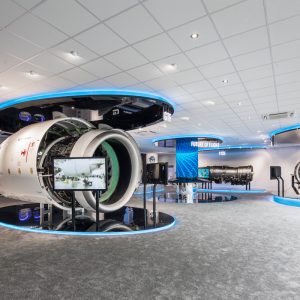 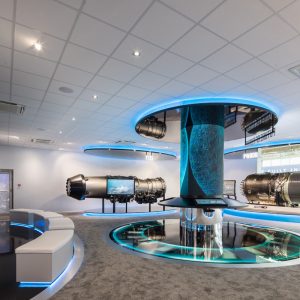 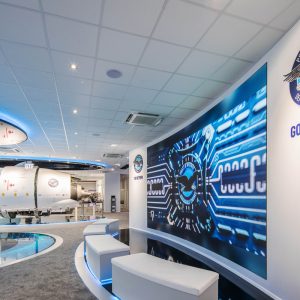 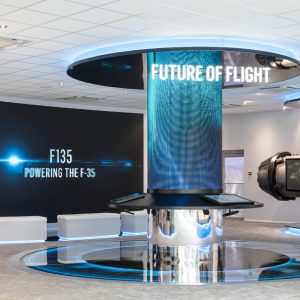 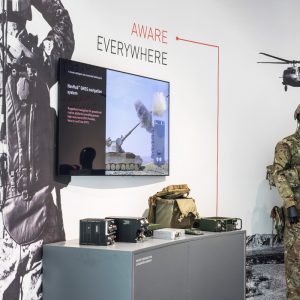 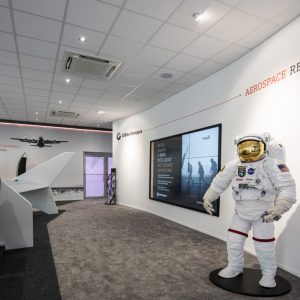 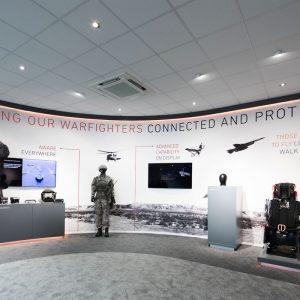 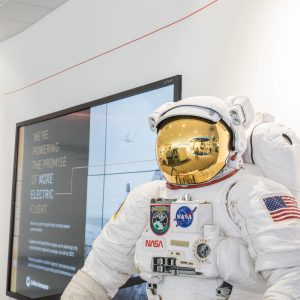 The Paris Air Show 2019 ran from 17 to 23 June. It is the largest and oldest air show and aerospace industry exhibition in the world. There were thousands of exhibitors and hundreds of thousands of trade and public visitors.

United Technologies (UTC) has a portfolio of business units serving customers in the commercial aerospace, defence and building sectors. It is considered one of the most respected and innovative companies in the world. Business units Pratt & Whitney (P&W) and the newly formed Collins Aerospace joined UTC at this event. They were to unveil their evolving brands whilst showcasing their newest, ground-breaking products.

The briefs came from these three distinct business units that comprise the aerospace interests at UTC. Each company had multiple stakeholders, different backgrounds, different branding guidelines and vastly different products. It was a first for all given that Collins had recently been acquired into the group.

As diverse as the briefs were, the goal was the same: first-in-class customer experience with a unified over-arching vision. We’d need to provide a 600 m2 pavilion with a museum quality interior. It would showcase a wide range of technologically advanced products and include interactive customer experiences. We would have to incorporate the branding guidelines for each company, while creating a unified look and feel!

As well as showcasing today’s impressive products, UTC wanted the pavilion to look forwards and show the future of flight. With the creative freedom of a blank drawing board, we could put forward proposals as to how we would create a balance between physical displays and creative use of technology.

The design had to embody the world-class nature of UTC. And this meant every experience inside the facility had to be perfect: from the spacious, electronic, double door entrance, to the visual wonder of the interior design.

The contemporary product lent itself to a dynamic physical display. And for these our biggest challenge would be ensuring equal prominence to a range which spanned from small hand-held devices to a full-scale jet engine!

When it came to meeting the brief of showing the future of flight, turning to technology was a natural choice. But it was essential to strike the right balance – creating a buzz without detracting from the physical displays.

To do this, an open museum-style pavilion was agreed upon. Smaller exhibits would be clustered around bespoke displays, allowing them to stand equally alongside larger exhibits. And we proposed technology solutions for the future of flight brief, which while eye catching would not overwhelm the rest of the pavilion.

These technology solutions included large format interactive and regular screens; directional speakers; and a floor to ceiling, 360-degree LED screen pillar with accompanying LED circular floor for the wow factor the client was looking for.

Everything would be unified with colour-specific branded LED lighting.

We called upon our long-standing and trusted AV supplier, Smart AV, to help us deliver the technology elements of the pavilion, and provide on-site support.

Such a complicated project required months of planning. We began initial discussions in December 2018, seven months before the show was to go live.

Collins had an interactive wall to complement their physical exhibits. At 138 inches, it was the largest touchscreen of its type in Europe, sending out quite a statement. It consisted of nine panel 46-inch seamless screens and a 138-inch touch overlay over the top.

And P&W also had a show-stopping 360-degree LED column and floor which formed the centrepiece of their future zone. This pillar consisted of eight 3.9mm LED columns. It was three metres high and 1.270m in diameter.

The LED floor was Aluvision technology. It is the highest resolution LED floor on the market, at a 2.5mm pixel pitch. Usually LED floor is at a 7.8mm pixel pitch. Aluvision is built with a modular floor structure so can be built directly into the exhibit.

Our clever stand design allowed us to transform the square LED formation into a circular one. We left a central internal ring with no panels to provide space for the LED pillar and touchscreen tables.

Smart AV produced the content for the floor and the cylinder – this was created onsite and based on the idea of the rotating blades of an aeroplane engine.

Both innovative and eye-catching, the LED pillar and floor was an ideal concept for the technology on show, without drawing too much attention away from the rest of the pavilion.

And in an extra twist, directional speakers were used to convey key information whilst virtually eliminating sound bleed. This would otherwise have been detrimental where so many products were being displayed in close proximity.

It was a key part of our brief that the pavilion achieved a unification of three different brands; a varied range of products; and of the present and the future of flight. Our use of technology therefore had to be carefully tempered so as to fit the equilibrium that was being sought by the client.

But even so, we were able to use technology to create moments of magic in the pavilion pitched at just the right level alongside all the other exhibits.

The pavilion was visited by over 2,000 delegates and hosted six media events where multi-million-dollar aviation deals were announced.

In UTC’s own promotional video they summed it up by saying “The wow factor is almost instantaneous upon walking inside the United Technologies pavilion.”

When we surveyed UTC after the show, the client highlighted the way in which the full-scale engines were showcased as being particularly pleasing. And also the LED flooring which was part of the LED column feature. Again, confirmation that we had achieved the right balance between creative use of technology and the physical exhibits.

And from our own professional perspective, it was pleasing that this was one of the first uses of Aluvision’s LED floor. It was exciting to bring the very latest LED technology to the show and use it in such a creative way.

When UTC conducted its own visitor survey, the sentiment was that this was their best show yet! And with that said, our clients are thrilled and will be using our services again for the Farnborough International Air Show in 2020.