Best Stand Up to 24 sqmGold 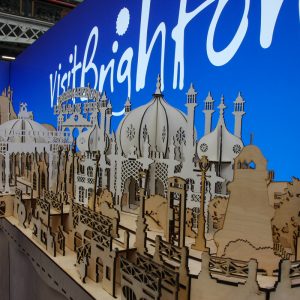 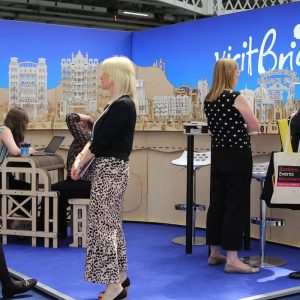 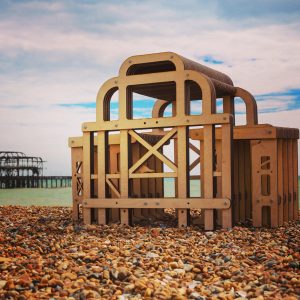 VisitBrighton challenged us to create an exhibition stand with a difference, defy corporate mediocrity, represent all that is good about Brighton by the sea, its vibrancy, compactness, its heritage and progressive artistic nature.

The trade shows VisitBrighton attend are the key exhibitions within the conference and meetings industry. There is huge competition from both domestic and overseas destinations when it comes to driving business events into the city. The challenge is to ensure conference and event organisers choose Brighton ahead of these.

There were no primary research studies, user journeys or personas available for this project.

LOOK AND FEEL FOR THE EXHIBITION STAND:

The exhibition stand should trigger the following reaction from people who look at it:

“Wow, that’s creative, what a great idea, that’s typically Brighton, how exciting and imaginative, I must find out more, I must talk to the people on the stand…”

“Well I never knew that, that’s brilliant, what a great way of showcasing Brighton, it doesn’t look like anything else I have ever seen at a show, how clever…”

In a nutshell, VisitBrighton wanted to showcase Brighton and its credentials as a business destination in a new, creative and exciting way.

WHAT BRIGHTON HAS TO OFFER TO EVENT ORGANISERS:

A miniature Brighton installation where key conference venues and landmarks are artistic interpretations of their real life counterparts and made out of several layers of plywood.

The exhibition stand, which had its first outing at The Meetings Show in London Olympia on 26th – 27th June 2019, is showcasing the principle venues that conference and event organisers can hire in Brighton as well as their location in the city and the compactness that is a major selling point (no transport needed, just a short stroll along the seafront or through a thriving city).

The stand is a representation of all that is good and great in the city. It provides a ‘seagull’s-eye’ point of view and gives a sensation of depth and vibrancy of the city.

It’s modular, playing with the idea of discovery and depth, a good way to showcase a lot of different elements of the city as well as famous landmarks and venues, and it is visually appealing on a walk past because it’s novel, different to other small trade show stands.

The iconic West Pier was turned into a table and chairs for trade show attendees to sit down with their laptops and have a chat with representatives of Brighton venues.

Rachel Clark, Chief Executive of the West Pier Trust, said: “We love the West Pier table and chairs – it’s a completely original idea which succeeds in being quirky, humorous and practical whilst also respectful of the beloved West Pier ruin.”

The Palace Pier was made into a bar table with stools to act as a meeting area for VisitBrighton and their customers.

Another innovative aspect of this installation are the storage boxes that have a dual purpose as they are also used as a base structure of the entire exhibition stand.

Fold-up cards of the iconic Royal Pavilion venue were made as giveaways and coasters with a Brighton skyline made out of plywood are currently in productions.

We looked at various methods to create the stand, and found that laser cutting plywood was a perfect fit. Also, as Brighton locals know, the city is awash with Regency architecture, which with its intricate designs translates well to the details a laser cutter can produce.

As the concept grew, so did the innovation. As well as being a display, there were the logistics around setting up a stand with a limited time, size constraints, robustness, fire retardancy, modularity. Built into the stand solution is an innovative system that uses the packing boxes to create the hidden base structure of the stand itself so that it transforms from a packed down transportable system into a complete 5m x 3.5m display stand.

As well as a stunning visual display, the stand also needed to have the function of a meeting space, this is a place where visitors have the possibility to engage one to one with the knowledgeable VisitBrighton staff about the city’s offerings. Requiring something that would blend in with the aesthetic and produce a memorable experience and a talking point, we created the West Pier table and stools, and a Palace Pier work bar, which could be used for stand up conversations or sat at upon high stools.

Building the stand was an incredible journey, where we really pushed the limits of what can be achieved with laser cutting. Each venue has its own character, artistically interpreted from its real world counterpart. These are rendered at large size, but surrounding them is a wealth of smaller detail, the South Downs, the London skyline, regency lamp posts, seagulls, ice cream, a carousel, small statues, and many other pieces that form the aesthetic whole.

Working with digital fabrication meant the final pieces could precisely mirror the designs, millimetre for millimetre, enabling us to digitally conceptualise a modular system that fitted together in the workshop in the way it was designed and provide the client with a finished stand that matched our 3D concept

As part of the project, we undertook primary and secondary research focused on the target audience for VisitBrighton at the Meetings Show which was synthesised and presented to the client.

Personas based on the research findings were created which the client is using for other marketing activities as well.

Mood boards for the VisitBrighton exhibition experience and three different ideas were proposed.

The idea around building a mini Brighton got all the partner organisations engaged and excited to such an extend that some of them put in extra time and effort in the evenings or weekends in order to meet our deadline.

The exhibition stand stood out at The Meetings Show and grabbed people’s attention which resulted in additional sales leads.

The number of Visit Brighton’s enquiries increased by an incredible 164% on their attendance at the previous year’s show.

Nigel Austin of the SMP Group, an exhibitions installation company we worked with, said that he had never seen anything like it in his career within the exhibitions industry that spanned over four decades.

During the Meeting Show, the stand also received media coverage in trade press such as Incentive Travel, the Meetings Industry Association website, WiredSussex, Brighton & Hove Chamber of Commerce, and triggered a social media buzz on Twitter and LinkedIn during the Meetings Show with key influencers attending the show and sharing images and videos of the stand.

VisitBrighton have been asked to take the stand to EMEC 2020 in Seville, to promote Brighton hosting EMEC 2021. The organisers of the show have offered them complimentary stand space as they are excited to be able to make use of such a high impact stand to promote their next conference.