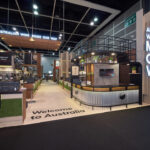 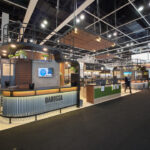 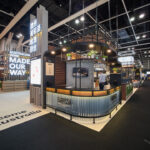 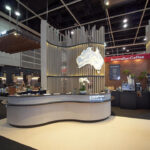 Vinexpo Hong Kong 2018 (Vinexpo 2018) was the leading industry event for wine and spirits professionals in Asia-Pacific, held from 29 to 31 May 2018 at the Hong Kong Convention and Exhibition Centre. The three-day B2B trade event provided the opportunity for wine providers to showcase their brands to the most influential buyers, importers, distributors, producers, sommeliers and merchants from around the world.
Wine Australia was our client and has a significant presence with a total pavilion area of 810 sqm in the exhibition hall, across four neighbouring islands. We, HKTDC was appointed to supply best-in-class exhibition stand concept with design, build & construction services for this momentous exhibition stand. We were instructed to produce a cohesive, consistent and impactful Australian stand to house approximately 130 wineries to promote their brands in Asian market.

It is crucial to create a platform to highlight Australian wine credentials and messaging around quality, provenance, history, regionality, and diversity. And to convey a sense of the quality and diversity of the wine that Australia is currently producing. We initiated a design that breaks the accepted stereotypes format with a new and interesting layout to have attendees leave the Australia stand with a sense of excitement and enthusiasm about the future of Australian wine.
To present a unique and never been seen before presentation of wine at a trade show, we opt for using hanging structure going across the walkways, plus the striking visible gantry to grab the eyes of all visitors and exhibitors. These signage included imagery as well as text to clearly show the Australian precinct across the exhibition hall and maximise visibility that significantly enhance attraction and presentation to the stand.
And this was the only set feature be allowed for Australian Wine stand, the Country of Honour, with no-one else can do. It helped stand out the stand with a look of a package of 4 islands brought together from a distance. This line of sight down a walkway sets a benchmark for wine events globally.

For consistency in the way Australia was presented around the world, followings aspects were considered precisely to generate a dynamic design proposal.

(a) Traffic pattern
It’s important that the walkways did not undermine the sense of one cohesive presence from Australia, as opposed to four separate stands across four islands. We set the layout to encourage the traffic flows be in and around the stand without walking only around the outside edge. The feeling of open space and freedom of movement was well retained throughout the blocks.

(b) Tone/Mood
Relaxed, casual and warm, yet sophisticated and premium were the keys to carry forward. An open and welcoming space that was comfortable to be in, engaging and enticing from afar. We adopt the light, natural & earth colourings to create an atmosphere allowed the attendees naturally to gravitate towards the Australia stand. The key tone and mood also helped promote the fun, light hearted, upbeat, positive and uplifting feeling among the whole pavilion.

(c) Materials
We wanted to maintain the unique identity for Wine Australia and not blend in with the other stands. We purposefully picked the natural materials e.g. wood laminate (oak, walnut colour) with other complimentary materials that appear natural to accent the “natural” sense. We also introduced other materials like steel rods, black & coloured laminates, concrete veneers and metallic sheet to enrich the texture variation. Natural greenery was also used to compliment the primary use of wood. The used of greenery presented the idea that the space was living and fresh. We in particularly arrange to house the greenery in wooden boxes to promote character and the ability to dress specific areas.
To reinforce the sense of refinement and sophistication but still down to earth, seating set was a combination of wood and metal elements to compliment the overall tone of the brand.

Wine Australian at Vinexpo Hong Kong 2018 was very successful in terms of stand look and feel. It was an immersive environment for visitors to freely explore Australian fine wine. It was warm and inviting with clear character, which set it apart from neighbouring stands. The sheer numbers of people in and around the stand for the duration of the event proved that it was inviting and comfortable. It successfully conveyed the Australian spirit and personality to attendees whist supporting the premium nature of the wine being showcased.
The stand won great applause from everyone involved. As per client said : “We had more visitors to the pavilion on all three days than any other area at Vinexpo. The CEO of Vinexpo remarked “the other exhibitors were very jealous!”
While we received a very encouraging compliment with a big thank you from our client, Wine Australia. It was described the Australian stand was the best design and build he have ever seen at trade event.
The Australia stand also generated significant positive media coverage about the Australian wine. Below the video on youtube shows how the success of the Australian stand at Vinexpo HK 2018.