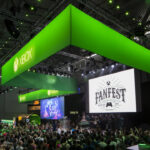 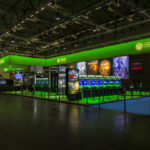 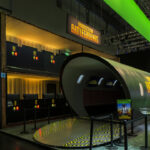 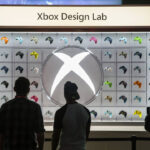 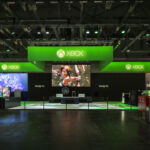 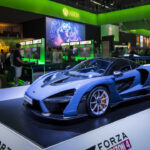 Ensure Xbox has a strong presence at Gamescom and displays its great line up of game titles and content for all that come. Deliver Entertainment as a key element within this and show our passion for the fans to everyone who attends.

We created a Booth of nearly 2,000 sqm in size incorporating over 250 consoles and PC’s with the largest list of game content and titles ever seen at any show in the World for Xbox. We ensured that the content was there for everyone to see upon immediate view and approach by designing the layout to run laterally across the entire width of the booth, and then a key graphic for each title under which each engagement of experience was delivered. This would enable the visitor to immediately see under the Xbox umbrella, the Greatest Line Up ever seen in a single visual snap shop, then easily find their way to their preferred game titles they would like to experience. All of the experiences were design to flow straight in and through where everyone who engaged each experience would exit at the rear of the booth and circulate back to the front again to experience the next one. The stage as the hub in the center of the booth and design, was purposely designed to have an uninterrupted view from every point on the booth, so those who were queuing would continue to be entertained at all times whilst waiting for their hands-on experience. We then additionally ensured we had content that engaged the queuing audience throughout the show, including in queue competitions to ensure every moment on the booth, whether hands on, queuing, or taking photo experiences after a hands-on were all based on an experience at every moment.

Each element of the booth was brought to life with an immersive experience in to the game that was being engaged and was entertaining and experiential at every level. An example of this is the Players Unknown Battleground (PUBG), where this was delivered at a completely experiential level. Firstly, whilst in the queue our new recruits were commanded by the Sargent to stand straight and orderly and ready for boarding. Then each platoon of recruits was marched in to the aeroplane fuselage and seated within. The end of the plane fuselage then automatically raised and closed to seal the troops (the fans) within. Once inside the military team (actors in costume) would prepare them for take-off. The windows in the plane, and fuselage were all part of a simulator experience, and those inside would feel the plane move and take off with their seats rumbling, sounds of the engine and windows with the take-off scene from the game. The Platoon Sargent would brief them of the Battle they were about to descend in to, making them aware of the in-game map, weapons, how to use them, and key pointers of how to survive, battle and win. Once the briefing was finished the plane side door would open, where each recruit would parachute out (with fans and sound effects as the ‘leaped’ out. They would then jump in to battle where each team would be taken to their respective hanger for team battle and compete head to head. This was still immersive with lighting effects and surround props, and staff in costume trained to support them with anything they needed to compete in game. Finally, they would receive a medal for their experience and a green-screen photo of themselves in a parachute within the game scene descending on to the PUBG battle. This is one example of many throughout the booth including a Forza Simulator experience and entering in to Ori’s amazing Secret Forest.

Everyone who attended also receive a Loyalty Card and as they engaged each experience around the booth they would have their Loyalty Card stamped. They would then be able to use the card to redeem gifts and also enter major Prize Draws for unique Prizes during the event including a new console and games.

There were also specialty experiences beyond the amazing breadth of game play titles, there were also experiences focused on the Game Pass where fans who tried a number of the Game Pass Titles on Booth could take their Loyalty Card to win a free Game Pass vending competition, where they could win a Free period on Game Pass. Also Xbox Design Lab display featuring the latest and greatest Xbox Design Lab Controllers with an experience enabling the fans to design their own and have this custom made. There was also an experience for Adaptive Controller featuring all of the accessories for all aspects of disabled game play.

Additionally, we had an Xbox Lounge where special access was able to be won through numerous methods open for everyone. The Lounge would give them uninterrupted access to game play, charging stations, free drinks and snacks, a dedicated SWAG bag of goodies, and ideally positioned Vlog station – a rare pit-stop and experience for the show.

With over 350,000 Booth Interactions and the highest trial rate ever achieved by any Xbox Booth around the world, the success was well coveted. The increase of loyalty to the Booth and the ability of fans to be entertained every moment they were on the booth proved a huge success, as well as the uniquely deeply immersive experiences for each title were all highly praised by every and all attendees.