Event Name: Various shows annually since 2015, and still in usage. 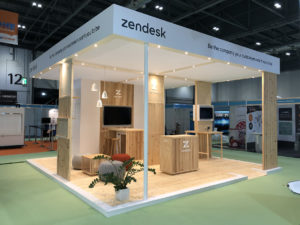 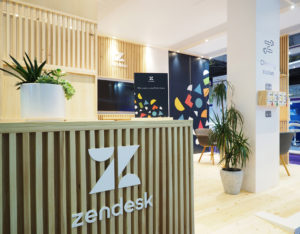 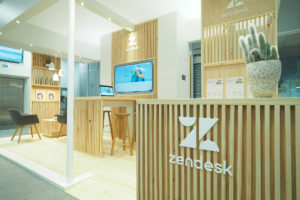 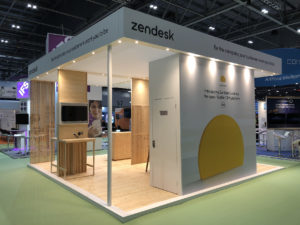 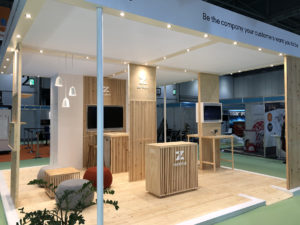 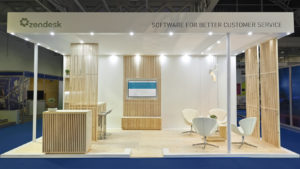 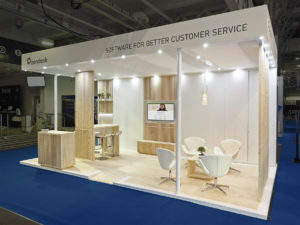 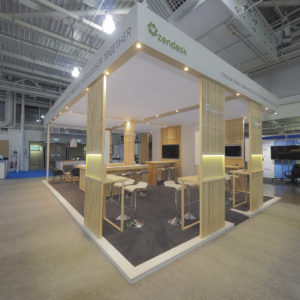 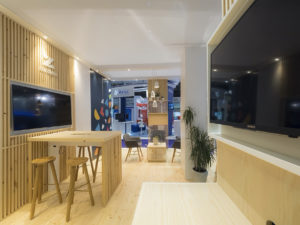 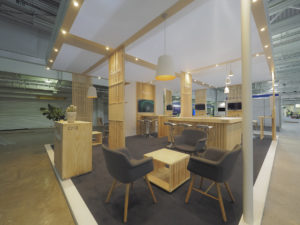 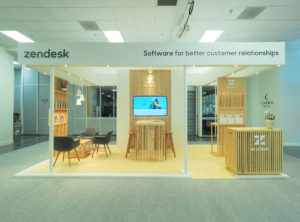 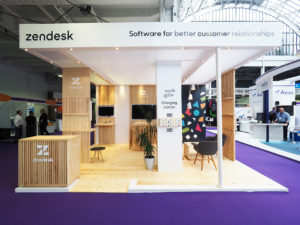 UNLTD_XYZ was requested to design and facilitate Zendesk’s first UK exhibition stands at customer experience technology shows in 2014. In 2015 the design conscious client was already re-branding and they wanted their exhibition presence to reflect the brand evolution.

Interpretation of company philosophy of having a more ‘Zen’ look and feel to their branded spaces. Working with the internal creative team, we designed, managed and produced the new minimalist natural aesthetic, created for UK and European shows for this global customer service software company.

We started the creative process after the brief was developed on, from the initial year of exhibiting and set about creating a suitable vision for them, knowing that the suitable specification of the materiality would be key to achieving the sense of ‘Zen’ within a corporate exhibition environment.

Spatially the stand needed to allow for the following functionality:
A reception desk to control and manage visitors, an informal and open meeting area, one to three product demonstration pods, an audio visual presentation area, adequate storage space, integrated literature and give-away display and considered branding.

The elements would be required to be used at several exhibitions throughout the year across various size and shape spaces, and thus the custom designed elements needed to be modular and changeable.

The brief and remit or works evolved over the years until the present day and many updates were made, however still utilising the initial kit of elements that was created back in 2015.

We started with the spatial arrangement and visitor flow of the required areas. This informed an architectural linear layout to the stand design. An open plan arrangement without any physical barrier perimeter walls, realised with sight lines through the stand design, achieved via the open slatted wood paneling details. This then provided a welcoming and inviting ‘less is more’ overall design aesthetic.

The slatted wood panels were created to be easily changeable in height to work across varied stand height limits. All of the elements were designed with re-use in mind from the outset. The same design style was adopted for the literature/product display panels, reception desk, meeting area coffee table and demonstration desk, demo pods and audiovisual wall. With the idea to integrate several of the elements within the rear perimeter wall for a clean look and feel and to use the bespoke wood slatted paneling as a welcome wall to the rear of the reception for vanity and providing a backdrop for demo desk or demo pods.

Furthermore, these slatted wood panels acted as structural supports to the above ceiling canopy and high-level fascias that encompassed the same size as the overall stand space. The high-level fascias to all open sides of the stand provided maximum visibility for the branding and marketing message placement to all sight lines to the stand, to enhance the Zendesk presence at shows. The ceiling canopy itself was completely open and infilled with a white stretchable fabric, which blocked unsightly views of industrial exhibition halls and helped to create a sense of calm on the stand area below.

Usage of bonsai plants initially and then larger plants to bring a sense of calm and nature to the space and the positive effects of biophilia within the naturally designed space was researched and implemented.

Regarding the flooring specification, FSC pine real wood tongue and groove boards were used as these could be installed and removed with ease and be re-used many times once sanded and finished. A perimeter band of white matt laminate detail was used to denote the perimeter of the stand platform.

Lighting was key to insuring the stand space was evenly and warmly illuminated. Recessed LED lights were incorporated within the ceiling canopy perimeter fascias and suspended pendant lights positioned over meeting areas to create a cosy and relaxed ambience.

Initially the furniture specification was based on rental items, however we later utilised the client’s head office reception furniture for visual consistency, which helped to keep the budget contained rather than renting or purchasing new each time.

The colour palette was initially inspired by the company’s simple brand identity and then evolved to incorporate the minimal, geometric and colourful rebranded palette more lately.

The balance of a minimal architectural design style and open plan layout provided a sense of calm and ‘Zen’ within a hectic environment to conduct serious business. Furthermore, the considered materiality, lighting and interior design styling added to the calm feeling and made the Zendesk exhibition stands truly stand out from the visually busy landscape of a trade show environment.

Feedback at the many shows since 2015 that the stand has been used at was extremely positive from the various marketing managers we have had the pleasure to work with over the years. As well as the amount of positive comments made by competitors and show organisers directly to the clients on the stand.

Post-show client feedback from the marketing and brand team provided over the years has always been positive, all be it not quantified statistically to us.

Significant brand awareness has always been achieved and our continued high level of customer service and progressive creativity often celebrated and recognised by the clients.

We are very proud that the extremely considered and subtle evolution of the stand design since 2015 to the present day has worked so well. In addition, we are even more pleased to know that the stand design has with stood the test of time and does not look dated and if anything is of a timeless look and feel.

Furthermore, as sustainability in design is at the core of our company ethos, knowing that this stand has made significant savings of raw materials and less waste being generated over the years in its continued reuse makes us proud.

The results clearly show that if you create considered design proposals and produce quality manufactured exhibition stands, they can be used for long periods. Even under considerable usage, as this stand has had at several shows annually in some years.